There are many opportunities to support local and international groups this holiday season. Some help out local organizations and some help people around the world. The La Crosse Tribune had a nice spread on Sunday about Nine gifts that give back. Included in their list is Heifer International, a wonderful organization that really does "spread the wealth around."

Locally, don't miss the Fair Trade Market on Monday and Tuesday, Dec. 1 and 2 in the Ward Room, Cartwright Center, UW-L.

Also, consider a gift to your local peace and justice group, women's shelter (New Horizons lost $35K in county funding and they need your help!) or educational institution.
Posted by Cathy Van Maren at Monday, November 24, 2008 No comments:

It GOT to be REAL! 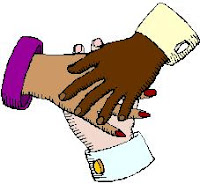 Friday, November 21, you're invited to join together for food, fun and fellowship at the first annual African-American Cultural Alliance R&B Karaoke-thon, "It Got to be Real," from 5 to 11 p.m. at the Concordia Ballroom (1129 La Crosse Street).

The purpose of the event is to establish a non-profit community based organization. This is a Free event and the public is welcome! For more information call: (608) 789-6270
Posted by Cathy Van Maren at Tuesday, November 18, 2008 No comments:

YOU can help identify high priorities for sustainability in La Crosse

I recently received an invitation to participate in a La Crosse Joint Oversight Committee on Sustainability survey and I'm passing it along to you. Note - the deadline is November 22! (emphasis added):

Our committee consists of seven members, including three City representatives, three County representatives, and one community member ... . We are writing a "Strategic Plan for Sustainability", which will be formally presented to the City Council and the County Board for their consideration and adoption. If you are interested in helping out with this endeavor, we invite you to complete a very short online survey. The results of this survey will help us identify high priority sustainability issues that the strategic plan should address.

The survey consists of two questions. The first question simply asks you to select (and rank) the 5 highest priority issues from a list of 19 sustainability issues. The second question asks you to, "Give us your best idea – a specific initiative or innovation - that would help make the La Crosse area a more sustainable place to live."

Survey responses are completely anonymous. The survey does not ask for your name, nor does it record who completes the survey. We will simply tabulate the results and use them as we complete the strategic plan.

If you would like to participate, please complete the survey by 10 p.m. Saturday, November 22.

Your help in making La Crosse a more sustainable community is greatly appreciated.

Posted by Cathy Van Maren at Sunday, November 16, 2008 No comments:

I've bobbed to the surface in the whirlpool of work, family, sleep and other stuff and just in time, too!

Saturday - meet at 12:30 p.m. on the La Crosse Street side of City Hall to show support for repeal of California's Proposition 8 and a nationwide end to discrimination against the GLBT community. You can also sign the "Repeal Prop 8" pledge now and forward this to your friends as soon as possible.

Tuesday at 6 p.m., it's RETHINKING THANKSGIVING, a community feast and discussion at the Ho-Chunk Three Rivers House, 724 Main Street. Take a look at the historical and contemporary issues facing indigenous people and celebrate the harvest. Everyone invited. FREE. Also, this year we will collect coats and jackets for those who need them.

Thursday at 7 p.m. - Clean Energy Coalition hosts a public forum at the Ho-Chunk Three Rivers House, 724 Main Street. on CAPX2020 with featured speakers Tim Carlsgaard, representing CapX 2020, the consortium of eleven utilities that is planning the expansion of the transmission grid across the Midwest and Carol Overland, a Minnesota attorney who is an intervener opposing CapX2020 (www.nocapx2020.info) For more info on the forum, email Bill.

La Crosse is about to witness the construction of a huge 345 kv transmission line across the river near downtown La Crosse, that will then head north on the river to French Island, then north and east to a substation between Onalaska and Holmen. Homeowners affected in Minnesota were notified, but those on French Island have not. This project, along its projected trajectory through Minnesota, has been the subject of many public meetings. But its impact in Wisconsin, only now, is coming to the attention of policy makers and governmental officials. Over the past few months several hearings have been held in La Crescent and other Minnesota sites with regard to some of these issues. But now, it is a hot issue for Wisconsin and specifically for La Crosse.

Still seeking some helpers to post regularly here and help keep up the calendar of events! Email for info.
Posted by Cathy Van Maren at Saturday, November 15, 2008 No comments: