This is our world on consumerism Candidates - choose one, be one 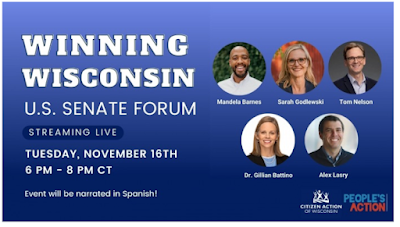 Citizen Action of Wisconsin
U.S. Senate Candidate Forum Tuesday, November 16
6 - 8 PM
Citizen Action of Wisconsin is proud to host the state's FIRST 2022 U.S. Senate Candidate Forum with top candidates for the WI U.S. Senate on Tuesday, November 16th, from 6:00 - 8:00 pm. This forum is an important part of our endorsement process. Members from each organizing cooperative from around the state will ask questions of U.S Senate Candidates relating to key parts of Citizen Action's platform, including a fair healthcare system, climate equity, and a strong economy for working people. Attendees will have the opportunity to provide their feedback on their preferred candidate, which will help to inform Citizen Action's endorsement in this race.
Confirmed Candidates:
This election is critical to building our people power and moving our collective people centered agenda forward. The fate of our democracy, our ability to defeat climate change and create a society where all are welcome, is on the line. All are welcome!
REGISTER FOR THIS ONLINE EVENT.
AND
HOW TO RUN
an online workshop presented by the
La Crosse County Democratic Party
Saturday, November 20 at 2 p.m. 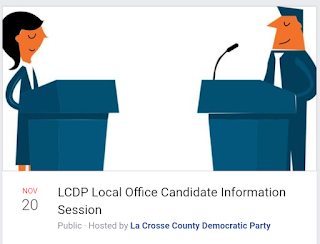 Join the LCDP and Rep. Steve Doyle for a one-hour information session on how to run for local political office. We will answer questions and cover everything you need to run for city councils, county boards and school board races in the 2022 election.
Register at: https://zoom.us/meeting/register/tJYodeGhrz4tEtCckptEaKKPthXIb-axZgGn
Email chair@laxdems.com for more information.
UPDATE:
Wisconsin Progress is offering candidate training in La Crosse on Saturday, December 18. Learn more at their website.
Posted by cathy at Friday, November 12, 2021 No comments:

From Veterans for Peace:

Over one hundred years ago, the world celebrated peace as a universal principle. The first World War had just ended and nations mourning their dead collectively called for an end to all wars.  Armistice Day was born and was designated as “a day to be dedicated to the cause of world peace and to be thereafter celebrated."

After World War II, the U.S. Congress decided to rebrand November 11 as Veterans Day. Honoring the warrior quickly morphed into honoring the military and glorifying war. Armistice Day was flipped from a day for peace into a day for displays of militarism.

Veterans For Peace has taken the lead in lifting up the original intention of November 11th – as a day for peace. As veterans, we know that a day that celebrates peace, not war, is the best way to honor the sacrifices of veterans. We want generations after us to never know the destruction war has wrought on people and the earth.

Veterans For Peace has been celebrating Armistice Day almost since the organization's inception, with a few chapters doing yearly events. Since 2008, with the passing of an official Veterans For Peace resolution, it became a VFP national effort. Each year, chapters across the country "Reclaim Armistice Day" by pushing the celebration of peace into the national conversation on Veterans Day.

Veterans For Peace is calling on everyone to stand up for peace this Armistice Day. More than ever, the world faces a critical moment. Tensions are heightened around the world and the U.S. is engaged militarily in multiple countries, without an end in sight.  Here at home we have seen the increasing militarization of our police forces and brutal crackdowns on dissent and people’s uprisings against state power. We must press our government to end reckless military interventions that endanger the entire world. We must build a culture of peace.

Armistice Day — the commemoration of the truce that brought the end of WWI — became Veterans Day in 1954 in the aftermath of World War II and the Korean War. The reason, said President Dwight Eisenhower at the time, was to honor veterans of all wars, not just WWI.

“But to my grandfather and other World War I vets, that change symbolized for them a betrayal of what they felt was the promise of Armistice Day — not just the end of their war, but the end of all wars, and a commitment to peace,” said Michael Messner, professor of sociology and gender studies at the USC Dornsife College of Letters, Arts and Sciences.  -  "The true meaning of 'Armistice Day'--a commitment to peace" by Susan Bell, November 9, 2018, USC News

From Kurt Vonnegut in Breakfast of Champions:

It was during that minute in nineteen hundred and eighteen, that millions upon millions of human beings stopped butchering one another. I have talked to old men who were on battlefields during that minute. They have told me in one way or another that the sudden silence was the Voice of God. So we still have among us some men who can remember when God spoke clearly to mankind.

So I will throw Veterans' Day over my shoulder. Armistice Day I will keep. I don't want to throw away any sacred things.

What else is sacred? Oh, Romeo and Juliet, for instance.

And all music is.

Be a climate action leader! 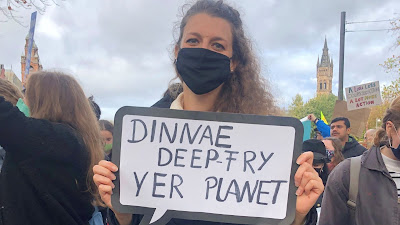 COP26 protest sign. Image: Sarah Wilson  From BigIssue.com
Please consider applying to be part of the city's community climate action plan team. We need strong climate activists who will work to ensure our climate action plan is strong, substantive, and action-oriented. If you are a young person who will be most affected by doing too little too late, you need to be on this team.

(LA CROSSE, Wis. November 9, 2021) The City of La Crosse is beginning the planning process for the City’s first Climate Action Plan. Climate action plans are comprehensive roadmaps that outline the specific Strategies and Actions that a city will implement to reduce greenhouse gas emissions and to help the community increase its resilience to climate change. The plan will be created by a multi-stakeholder CAP Planning Team facilitated and supported by the City’s Climate Action Plan consultant, paleBLUEdot llc.

CAP Team members will work collaboratively to co-create the City’s plan by exploring, creating, reviewing, refining, and supporting the prioritization of actions to achieve the City’s climate goals. The CAP Team will include City staff members, representatives of other public agencies, and consultant team members. The City seeks to also include community members in this collaborative planning team.

The planning team will work together through a series of 7 or 8 workshop meetings expected to begin January 2022 and continue through August 2022. Team members will also be asked to complete tasks between work-shop sessions. The total time commitment including meetings and tasks between meetings is estimated to be approximately 8 hours per month.

Community participants and need no experience or background knowledge in climate science to be significant contributors on this team. The City is accepting applications from community members 16 and older - however, please note that parent or guardian approval will be required for prior to participation by applicants who are under 18. We encourage you to apply by completing the application form prior to 4pm, Wednesday, November 24th, 2021. 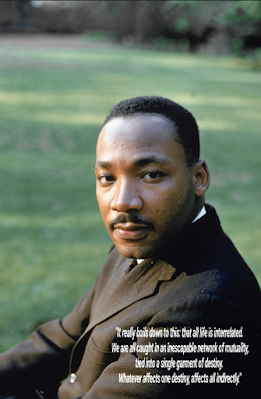 Nominations are now open for the 2022 La Crosse Martin Luther King, Jr. Leadership Award. The award recognizes and honors someone who has demonstrated leadership in and commitment to building community, enhancing diversity, and working for justice.

The award will be presented at the annual Martin Luther
King, Jr. Community Celebration, January 17 at 7 p.m. at the Viterbo Fine Arts Center. Dr. Sylvia Hood Washington will be the featured speaker.

Dr. Washington, an environmental epidemiologist, engineer, and historian has done decades of research on the effects on human health of industrial pollution. She has spoken widely about environmental justice. 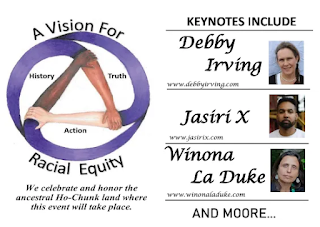 DETAILS AT SITE
Fees
Friday and Saturday in person or virtual:Friday only for virtual keynote, Debby Irving: ​
Symposium Sponsorship Opportunitites Available!
COVID-19 Protocol
A FULL COVID-19 vaccination or negative COVID-19 test result (dated after 5 pm on November 30, 2021 or later) will be required to attend WPS La Crosse in person. If you register to attend in person - you can choose instead to attend virtually at no charge until December 1, 2021.
Posted by cathy at Monday, November 01, 2021 No comments: