Sustainability is NOT a four letter word

Sometimes you have to wonder what some people are thinking. Certain La Crosse Common Council members are having trouble with the Sustainable La Crosse legislation on which a group of committed volunteers has worked long and hard. Dick Mial's column in today's Tribune gives you a few examples of some of the nutso ideas that must be overcome if this meekest of plans is to be implemented.

But, equally disturbing, are the people who just don't get that this is a real crisis. If you ask me, the time for suggesting is over and now it's time for some real mandates and I mean mandates on private individuals and business, yes.

For example, we now forbid people from burning waste in their back yards. Why? Because the smoke and smell is a nuisance, it's a fire hazard, and worst of all, it's a major health hazard, especially when people burn plastics and other things that should not be burned. It's a government mandate that you NOT burn your trash and it's for the good of all that this mandate exists.

Now it's time to mandate a few more things. I'm all for mandating that businesses selling electrical appliances and toys (ceiling fans, refrigerators, televisions, etc.) turn them OFF. I think we all know what a ceiling fan looks like whether it's moving or not. Or how about the city mandating that any group using city facilities pay a carbon tax for the electricity they use. And that tax increases as more power is consumed. (Yes, I am out to END the wasteful and polluting Rotary Lights as we know it!)

I'm also in favor of mandating that private individuals quit wasting energy with crappy windows and minimal insulation. If I were king, the city would go neighborhood by neighborhood and do an energy audit of every house, then work with homeowners to WEATHERIZE - upgrade doors and windows, insulate, seal cracks, etc. Why couldn't the city offer low or no interest long term loans, paid for by the stimulus bill, to be paid on property tax bills, for homeowners to do this? Homeowners would save on energy costs, people would be put to work building and installing upgrades and utility companies would not have a leg to stand on when they wail about increasing energy demand. (The latest National Geographic magazine has a great feature article on energy conservation we can all do right now.)

And, while they're at it, the city should ensure that homeowners who DO upgrade to save the planet aren't punished for it by higher property taxes. Maybe each neighborhood could be like an energy TIF district, where the payback for the upgrades, say at 0% over 30 to 40 years, takes the place of any property reassessment due to the energy enhancement of the property. And after the 30 or 40 years, then the enhancements can be used to increase the property taxes (assuming the world doesn't end in 2012 or something (since apparently the Y2K apocalypse didn't work out as planned.))

It doesn't have to be Draconian.

The City of Austin does an annual Kill-A-Watt Challenge and businesses participating see a great financial savings from reducing their energy costs. Even Wal-Mart, which has started its own energy challenge, is requiring that suppliers start using less energy too.

One elderly person I talked with was afraid she would be required to ride a bike or [gasp] SHARE A RIDE with someone if the sustainability plan passes! Rather than scare old and overweight people with visions of bicycle torture, why not make it an offer they can't refuse by charging much higher parking fees, increasing frequency and convenience of public transportation (hey! THAT one IS in the sustainability plan) and using the $20/month bicycle incentive in last year's stimulus bill to get some of those big behinds out of the Lexus and onto a bicycle (or at least a bus seat.) Why should those of us who have to BREATHE for a living subsidize fat asses who insist on driving everywhere and clogging our air with asthma inducing pollutants?

The sustainabilty plan is a good start, but to me it doesn't go far enough. Read it and then contact your council representative to vote for this important first step. (And while you're at it, ask her/him to see about getting council meeting agendas posted on the city's website at least one or two days in advance of council meetings!)
Posted by Cathy Van Maren at Tuesday, February 24, 2009 No comments:

Run for cover or stand and fight 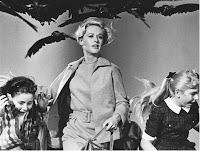 The Republicans have left the jungle gym and are in hot pursuit of their latest target, progressive nominee for Secretary of Labor, Hilda Solis.

First an anonymous hold, then more time to "review her responses" to their questions, then a minor business tax owed by her husband threatened to stop her nomination.

The Nation magazine comes to the point,

The real problem for her opponents is that under Solis, the Department of Labor would once again defend the rights of workers after eight years of repealing, reducing and blatantly ignoring workplace laws and regulations. As a state senator, Solis authored the first environmental justice law in the nation, and she has since said she is committed to creating green jobs. She also told the Senate that she would address the retirement security crisis; ensure that workplaces are safe, healthy, and fair; and protect workers from job discrimination.

Solis has been one of Congress' strongest backers of the Employee Free Choice Act, serving as a co-sponsor of the measure in 2007, and her nomination is turning out to be an early proxy fight over the legislation itself.

Given that conservatives are going all out to block Solis's appointment, and the fierce and effective right-wing effort to push back the stimulus package, it's crucial that your elected reps hear how many Americans support President Obama's pick for labor.

Some thought the battle was over in November, but that was just the opening round. Every progressive change will be a new battle. So, get on the phone, write that email, mail that letter. This one's worth fighting for.
Posted by Cathy Van Maren at Saturday, February 07, 2009 No comments:

This is from Campaign for America's Future via www.dailykos.com:

The word on the street here in Washington is that the right is killing us with phone calls to Congress on the Obama economic recovery plan. One congressperson said the calls are running 100 to 1 against it.

The legislation is now on the Senate floor. If senators perceive that Americans side with Obama in this fight—which several polls say they are—that will strengthen the power of progressives in the debate and we’ll get a good bill. If, on the other hand, senators are only feeling the heat from conservatives, then our advocates will be weakened and we’ll get a lousy bill. That’s just the way things go on Capitol Hill....

That means pick up the telephone and call 202-224-3121 (or use the toll-free service at 866-544-7573). Ask the Capitol operator to transfer you to one of your state’s U.S. senators. When you’re connected, say you’re calling to urge your senator to "support the Obama economic recovery plan and oppose all conservative amendments." Call back and repeat for your other senator. Then contact everyone you know and urge them to do the same.