For More information Contact:
Carolyn Dvorak
Wisconsin Bike Fed
(608) 317-2825
carolyn.dvorak@wisconsinbikefed.org
The City of La Crosse is planning the 2018 Ride with Mayor, City Staff and Dave Schlabowske, Wisconsin Bike Fed’s Executive Director at 9:30 am on June 5th beginning at Logan Middle School, 1450 Avon Street, with a press conference, followed by a ride. The goal of the ride is to look at progress made on infrastructure as well as future projects that will improve transportation, livability and mixed income development on the north side of La Crosse.

The ride will also focus on how active transportation -- bus, bike, and walk -- can improve transportation for everyone, not just those who use it. Active transportation can increase the efficiency with which we use the streets we have, take a percentage of cars out of traffic in peak hours to alleviate congestion, and decrease wear and tear.

La Crosse first earned Silver Status from the League of American Bicyclists in 2011 and kept the same designation when renewing the application in 2015. The City of La Crosse continues to work on implementing recommendations from the Bicycle Pedestrian Master Plan that was adopted in 2012.

Anyone interested in the progress of the La Crosse Bicycle Pedestrian Master Plan is invited to attend.
Posted by cathy at Wednesday, May 30, 2018 No comments:

Knock-kneed, coughing like hags, we cursed through sludge,
Till on the haunting flares we turned our backs,
And towards our distant rest began to trudge.
Men marched asleep. Many had lost their boots,
But limped on, blood-shod. All went lame; all blind;
Drunk with fatigue; deaf even to the hoots
Of gas-shells dropping softly behind.

Gas! GAS! Quick, boys!—An ecstasy of fumbling
Fitting the clumsy helmets just in time,
But someone still was yelling out and stumbling
And flound’ring like a man in fire or lime.—
Dim through the misty panes and thick green light,
As under a green sea, I saw him drowning.

In all my dreams before my helpless sight,
He plunges at me, guttering, choking, drowning.

If in some smothering dreams, you too could pace
Behind the wagon that we flung him in,
And watch the white eyes writhing in his face,
His hanging face, like a devil’s sick of sin;
If you could hear, at every jolt, the blood
Come gargling from the froth-corrupted lungs,
Obscene as cancer, bitter as the cud
Of vile, incurable sores on innocent tongues,—
My friend, you would not tell with such high zest
To children ardent for some desperate glory,
The old Lie: Dulce et decorum est
Pro patria mori.
Posted by cathy at Monday, May 28, 2018 No comments:

This is the first part of a fairly long post from former Wisconsin progressive and vet activist D Buzz Davis. This bill is another step toward privatizing the VA. The National Nurses Union opposes it as do many progressive vet groups. This Newsweek article gives background on which Koch brothers related astroturf groups are pushing it. ("in 2015 CVA received nearly $16 million in contributions and grants. Nearly all of that money, $14 million worth, came from the Freedom Partners Chamber of Commerce, another non-profit group that doesn’t have to disclose its donors, but has been called the Koch network’s ATM because it has dispersed hundreds of millions of dollars to Koch organizations.")


Dear Citizens:  THIS IS NOT YOUR NORMAL CALL REQUEST.

Seven (7) million veterans are in trouble.  We use the VA hospital system for our healthcare and Congress and President Trump are privatizing the VA out from under us.

Already 40% of the vets using the VA are being pushed into private sector healthcare where the waits for doctor's appointments are just as long or longer than at the VA.  And we many time receive lower quality care that at the VA.  And you as taxpayers have to pay about 30% higher cost for vets using private care than vets getting their care at the VA.

Special interests, like the billionaire Koch brothers are spending hundreds of millions to destroy VA healthcare because it is a high quality, cost effective Single Payer Single Provider system.  The Koch boys can't stand a government program that works!

In survey after survey 70% to 80% of the 7 million of us using the VA say We Want the VA Fixed, Funded & Fully Staff -- NOT Privatized.

But who listens to vets - not the President and most of Congress.

Thank fully we had 70 Democrats who had the political courage to vote no in the House but the MISSION bill passed anyway.

Now as early as Tues. the Senate may vote on the MISSION bill.  Trump demands passage so he can sign it on Memorial Day.

WE NEED YOUR HELP TO TRY TO BLOCK PASSAGE IN THE SENATE.

Can you give 7 million veterans a half hour of you time?

1.  HERE IS THE PLAN.  Each senator represents the millions of people in her/his home state.  But they also represent ALL Americans – that means you.

YOU have a right to call and urge/demand that each senator votes your way!

Here is what you and I need to do starting now.

Call each of the 47 Democratic and 2 independent senators and urge them to vote NO on the VA MISSION bill this week.  Just say:

Hello this is ______ and I am a veteran (or I have friends who are veterans).  I am calling to urge Sen. ____ to vote NO on the VA MISSION bill this week.  It is a terrible bill.  It will privatize the VA.  I urge the Senator to do what vets want.  We (they) want  the VA Fixed, Funded and Fully Staff.  Pls. vote NO on the MISSION bill.  Thank you!

That’s all you have to say.

2.  NOW HOW DO YOU DO THIS WITHOUT LOOKING UP 49 SENATORS' OFFICE NUMBERS?

B.  Before you call open this link: https://www.democrats.senate.gov/about-senate-dems/our-caucus

Now you have a picture of each senator and their name.

C.  Click on the picture and you have their name and state.

D.  Call the Wash. Operator 202-224-3121 say the state and then say the person's name.  E.g.  Wisconsin    Baldwin   Then her office will answer and YOU leave a recorded message urging her to vote NO on the VA MISSION bill this week.  Hang up.

F.  Click on next senator’s picture and repeat.  After one or two calls you will a pro.

THESE CALLS AGAINST THE MISSION BILL WILL BE REPORTED A COUPLE OF TIMES A DAY TO EACH SENATOR.  IT WILL INFLUENCE HOW THEY VOTE.

Thank you for however many calls you can make before they vote.

TIP  If your last name starts with the letter A thru J START your calling with Baldwin and work downward.

If your name start with K thru Z start calling with Wyden and work up the list.

After the vote on the MISSION bill (which will probably pass) we will inform you how many Democrats you helped vote NO.

And IF THE SENATE BILL PASSED IS NOT EXACTLY LIKE THE HOUSE BILL PASSED, then a “Conference Committee” will be appointed, compromises will be made, the bill will be changed and report out to both houses.

THEN THE HOUSE AND SENATE WILL EACH HAVE TO VOTE AGAIN BEFORE THEY LEAVE THURS. OR FRI.  If this happens we will be back at you for another round of calling.

So start burning up those phone lines to D.C.  And you may wish to forward this message to your friends who you know want to help veterans.

Want more detailed information on this issue?  Here it is from a group of us working to Save Our VA.
Posted by cathy at Sunday, May 20, 2018 No comments:

From Battle For the Net:

BREAKING NEWS: The Senate just voted to save net neutrality. Now we need the House of Representatives to do the same, or else the FCC will let ISPs like Comcast and Verizon ruin the internet with throttling, censorship and expensive new fees. Write your lawmakers now!

If you believe it's time to get rid of the "big Indian" statue from Riverside Park, please note this initiative from UWL's Student Association. 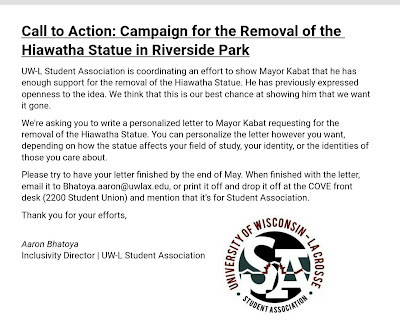 [And be sure to volunteer for the Medicare for All canvassing starting on May 19!] 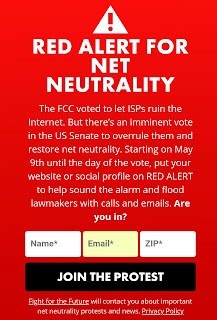