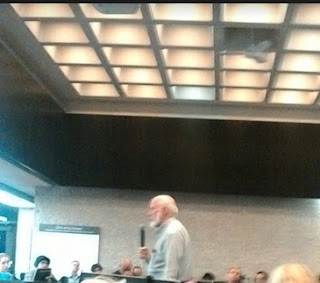 Last night's presentation by Dr. James Loewen (Lies My Teachers Told Me, Sundown Towns) was well attended and generated a good discussion about what the La Crosse area can do to follow Dr. Loewen's three step process to change: 1. Acknowledge that we were and still have aspects of being a "sundown town" (not welcoming/purposefully excluding people of color), 2. Apologize and 3. Quit doing the bad stuff (and do the good stuff).


Thankfully, there are forces for good in our community including the City of La Crosse Human Rights Commission, the Greater La Crosse Area Diversity Council, the Martin Luther King, Jr. planning committee, and SURJ (Showing Up for Racial Justice - link coming soon I hope) among others. While last night's conversation included good ideas and commitments for change, we also heard that often there is a major "say-do" gap - institutional support given verbally is not backed up by budgets, policies, and programming.

One way to combat racism and social justice issues in our community is to 1. Know about them and 2. Activate a network of advocates to make a noise about  problems and demand a fix. That is one way this Coulee Progressives site can help. We will try to work even harder to report on what's happening in La Crosse and what we can do to make positive changes.

To that end, we would like to work with others to create a reporting instrument so that incidents of racial and social injustice - profiling, threats, discrimination, violent acts, hate speech, etc - can be documented. While I'm sure many Coulee Progressives are aware of the constant atmosphere of racism that permeates much of our community, I'm also sure there are many white residents of our community who think there are no problems. At the very least, a report collection tool can document just how bad things are.

This could be based upon the successful UWL reporting tool for students, faculty, and staff to report hate or bias on campus which has exposed countless instances of racism and agression against non-white, non-straight students (though now apparently that is under attack by Republican legislators - who elects these people?! - requiring a disclaimer on the report form.)

But documenting bad behavior without taking action to confront, combat, and change it can be frustrating and maddening, so the second step would be to use social media to activate a network of concerned citizensh and that's another way this blog can help. Again, when we hear of things requiring action, we will help spread the word.

[Update! Fundraiser is over. Today only. Watch for coming events to support 11-15 truckload of support from La Crosse. In the meantime, drop off donations at English Lutheran Church (16th and King) or UWL Cartwright Center.]

Right now we are hearing and spreading the word about the protectors in North Dakota working to stop the fossil-fuel enabling, earth killing, precious water polluting Dakota Access Pipeline (DAPL). In the latest news, water protectors have set up a line on non-ceded land to block further construction (since the "requests" by the Obama administration have gone unheeded). Increasingly violent militarized police have descended on the peaceful group and have arrested hundreds.

The irony of this particular modern day iteration of the never ending resource wars that have devastated people around the globe for hundreds of years is that the publicly funded police are working with weapons and equipment provided by the US military to push the people who pay taxes (and therefore their salaries and operating expenses) from land that was never ceded to the United States - so Native American sovereign land - to benefit private oil companies which are funded and backed by multinational banks and corportions. So, it appears that sundown towns policies even work when you're on your own property.

In light of the recent aquittal of the Malheur Refuge vandals and law breakers, there is much discussion about unequal treatment by law enforcement of white criminals versus Native and black citizens peacefully exericising their constitutional rights. But, living in a racialized country, this is not new nor a surprise.

Neither of the (only) two major parties has voiced a strategy for rooting out the deep racism that drives our whole society. Neither party has made Native American rights and sovereignty an issue (Bernie Sanders did include Native issues in his discussions and speeches, but he has been absorbed into the corporate Democratic body and is little more than a promised future presidential gut ache. Barack Obama has spoken about Native American issues but he has a major "say-do" gap problem as illustrated by his administration's tepid and impotent reaction to NO DAPL activists). Neither party appears willing to remove deeply embedded Wall Street tumor from the heart of government. And while the Trump effect will undoubtedly usher in a larger, more violent, more extreme, more entitled and openly racist onslaught of white power extremists, nothing in the currently visible Democratic party team or priorities seems to indicate that countering this threat is any kind of priority. Indeed, Hillary Clinton's attitude toward those seeking immediate action on racial justice was outed in her famous dismissl of BLM activists at one of her high buck summer fundraisers has been corroborated by Wikileaks email releasesl.


"In the two-party system, both parties are multi-class and multi-sectoral structures that compete to achieve the upper hand in determining the modalities by which white privilege is dispensed and defended. They cooperate to legitimate a white consensus. Once class is no longer an issue (i.e., once any possible challenge from the white working class has been contained), the question is what then defines the state and whom does it operate for and against. The two sources of the state’s legitimation are the fear (real and imagined) of domestic unrest sparked by Blacks and the global threat, either from international communism in the past, or from anti-imperialist and anti-globalization movements or militant Islam in the present. The subtle and open message of the elite representatives of the racialized state is that it defends white privilege and whiteness against these domestic and foreign threats." - from Race and the Racialized State: A Du Boisian Interrogation