And a new award, the Drum Major Legacy Award, was given to Irving Balto.
Irv's story of activism demonstrates that all things are related in the work to bring a more just, peaceful, cooperative society into existence and that there is a long and continuing braid of people who make change happen. 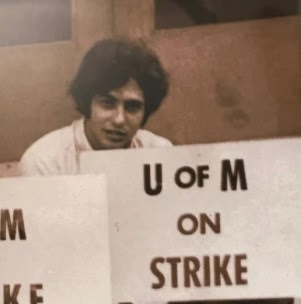 Here's his acceptance speech:
Thank you to the Reverend Dr. Martin Luther King La Crosse celebration committee for this award and those who submitted my nomination.

The picture of me, cropped from others who were present, was taken 50 years ago on May 4th 1970 at the University of Minnesota,two weeks after the first Earth Day. At the time, the U.S.was engaged in the Viet Nam war. There was an encroachment into Cambodia. The student left organized a nationwide non-violent campus strike and four students were murdered at the Kent State campus in this action by the Ohio National guard.

The 60s are noted as a time of incredible social change facilitated by the cultural zeitgeist. The Civil Rights Movement provided a template for change. Young people understood that the way things were was not the way things had to be. Individuals provided vision and inspiration. But, change came from many, including faith communities.There was an understanding that all work for justice was connected and at times needed to be disruptive.

The change of that time was informed and came from the work of 50 years and more of previous struggle, the work, especially, of the NAACP, founded in 1909, first wave Feminism achieving voting enfranchisement in 1919, the old left, and environmental advocates such Wisconsin's own John Muir and Aldo Leopold.

Why this history? We again are at a cultural tipping point 50 years from the iconic changes wrought in the past. The world is on fire in so many ways. Many who have worked to this moment are now in their 70s, perhaps in poor health. We are passing the torch of change to those who understand history and will continue the struggle for a more just society. The time is now and La Crosse is the place to be. A  good web site to be informed of local actions is Coulee Progressives. Pick up the torch and become involved. We are the leaders we have been waiting for.