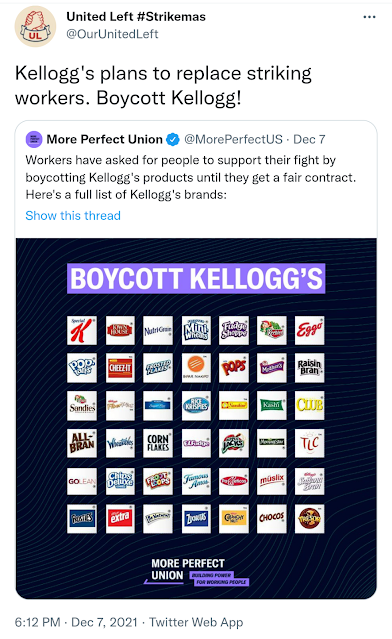 The statement by the Bakery, Confectionery, Tobacco Workers and Grain Millers International Union (BCTGM) following the December 5 vote on the tentative agreement between the BCTGM and Kellogg’s:

Members of the Bakery, Confectionery, Tobacco Workers and Grain Millers International Union (BCTGM) on strike against Kellogg’s in Battle Creek, Mich., Lancaster, Pa., Omaha, Neb. and Memphis, Tenn. have overwhelmingly voted to reject the tentative agreement. The strike, which began on October 5, 2021, continues.

Reflecting on the vote, BCTGM International President Anthony Shelton stated, “The members have spoken. The strike continues. The International Union will continue to provide full support to our striking Kellogg’s members.

“The BCTGM is grateful for the outpouring of fraternal support we received from across the labor movement for our striking members at Kellogg’s. Solidarity is critical to this fight.”

In October, 1,400 union members at Kellogg's plants around the country walked off the job after months of negotiations. They felt they had no other options. This Progressive Magazine article provides more background.

A few days ago, Kellogg's announced that it will hire scabs to replace the 1,400 striking workers. Unfortunately, this is not (yet) illegal. The PRO Act (Protecting the Right to Organize) would strengthen and broaden federal protections for workers wishing to form and join a union. It was passed by the House during the previous administration when the Senate was controlled by Republicans. It has again been passed by the House, but is stuck in the Senate again. Passing the PRO Act is another reason the filibuster must go or be reformed. You would think Democrats would be prioritizing this for immediate action, moving to suspend the filibuster to get this done before midterm elections. So far, disappointingly, but not surprisingly, three Dems blocking progress are allowed to continue doing so without any consequences from the party.

Until then, consumers have the power to support the union. Here are Kellogg brands. Find alternatives if you aren't already doing so.