The purpose was to canvas as many legislative offices as possible and share personal concerns about water. Additionally, the large number of citizen lobbyists was graphic proof that those interested in maintaining our state's clean water and access to clean water are uniting and will not sit idly by while constituents' concerns are ignored and damaging water legislation is passed.  Though organizers secured a large room for the event, the overwhelming response from around the state meant that not everyone could fit into one space.

Mary Dougherty, a Bayfield area blogger, mom, cook, author, and water activist kicked off the session. Dougherty's fight to keep an Iowa-based hog CAFO (Concentrated Animal Feeding Operation) from Bayfield county is a testament to what regular people can (and must) do when their quality of life and fundamental right to clean water is threatened by monied interests.

Following the keynote, a "bootcamp" on citizen lobbying was offered and then speakers from around the state spoke about CAFOs, tar sands oil pipelines, high capacity wells, mining, and impaired watersheds.

At 3:30 participants gathered in the Rotunda for a silent parade.

Because the legislature was in session and Scott Walker was scheduled to release his budget later in the day, legislators and their aides had to juggle floor duties with service to constituents. Some did better than others.

About a dozen of the group - from Vernon and Crawford counties - attempted to visit with Rep. Lee Nerison (R-96). We had a 20 minute 1 p.m. appointment but when we arrived at the Representative's office it was dark and locked with no note. At about 1:10 some of us tried calling the office but had to leave a message. We were accompanied by a reporter from WDRT radio who was recording many of the day's events.

About 12 minutes after the scheduled start time, Rep. Nerison's aide, Sandra Smith-Loomans, arrived with a Capitol police officer. When constituents asked why she was late she said that Rep. Nerison was on the Assembly floor. When we asked to meet with her in his office, she refused to even unlock the door and insisted that we talk in the hallway. Finally, she reluctantly agreed to constituents' requests that she at least find a room for us to meet in. Led by the police officer, the group ended up in a nearby hearing room where one unrelated person was sitting and waiting. Ms. Smith-Loomans sat with a stony expression and when someone asked if we should take notes for her (since she obviously was not intending to), she pointed to her head and smiled (like did that mean - I have a head or I will remember or I couldn't care less what you say here?)

With fewer than ten minutes to talk, Guy Wolf started out by thanking Rep. Nerison for working to ensure people had a right to access public waters and lands by crossing railroad tracks without penalty. He asked if Rep. Nerison would reintroduce this legislation this year. Guy then mentioned the increasingly flood prone watersheds in our area  including Coon Creek, Bad Axe, and Rush Creek, and how flooding was affecting district farmers. Additionally, flood driven runoff from CAFOs sited on ridgetops, was contaminating farmers' crops and cropland and covering towns in toxic sludge. After last fall's flood in the Rush creek watershed, many farmer's crops and baled hay left in fields are now unfit for use and some farmers are still waiting for DNR approval to plant this spring. 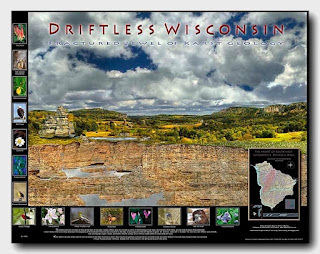 Forest Jahnke of the Crawford Stewardship Project noted that the karst geology of Crawford county was similar to that of other, more publicized, areas of the state where ground water is much more easily contaminated by dairy waste and other commercial activities. He requested that Rep. Nerison fight to include southwest Wisconsin in any special sensitive water protection districts the state might identify in this year's legislation.

Joan Wolf provided a printout showing the incredible shrinking staff list of the decimated DNR in our area and pointed out that giving the DNR control over water quality issues was useless if there were no DNR employees to enforce it. She requested the Rep. Nerison work to ensure a fully functioning DNR with sufficient funds, staffing, and support from the state to do its critically important duties.

Irv Balto, a member of CARS-La Crosse, told Rep. Nerison's aide that this is "not your grandfather's Vernon County." He explained that southwest Wisconsin is becoming increasingly industrial with barges and railroads carrying dangerous materials including millions of gallons of toxic crude oil and more and larger industrial farms and frac sand mines coming into the area. Balto mentioned last year's listening sessions held by State Senator Jennifer Shilling with the State Railroad Commissioner (Ms. Smith-Loomans attended in place of Rep. Nerison) and requested that at least one or two pubic listening sessions be arranged in the district at which Nerison himself would be available because there was too much to discuss and we were just a few people representing thousands of concerned constituents.

At that point, when a constituent asked to schedule an in-district listening session with in-person attendance by their representative, Ms. Smith-Loomans sprang from her chair, crying, "ACT 10!" and rushed from the room. Shortly after, she returned to announce that she had had it with protestors and being taped and filmed and asked uncomfortable questions on the spot and she wasn't going to put up with it any longer. Then she left again and that was that.

Our independent observer, still sitting quietly in the corner waiting, agreed with the constituents that her reaction was way over the top.

But, in the end, since Lee Nerison (we were told) has not once attended an in-district open to the public listening session in all his 12 years of "service," it wasn't surprising that there was (as it seemed) never any intention of listening to anything any of us had to say.

We had a much better experience with Rep. Steve Doyle (D-94), Rep. Jill Billings (D-95) and with State Senator Jennifer Shilling's (D-32nd) aide. These public servants, hearing that a group of constituents would travel a far distance to meet with them about an important issue, arranged in advance for a meeting room, had staff on hand to greet people, and arranged to take a bit of time to pop out of their important floor duties to greet the people they serve and comment on the water quality issues raised. In addition, all three agreed that holding in-district listening sessions, possibly with a representative of the DNR (if we still have one) and/or the state's railroad commissioner would be a good idea.

Beyond issues raised with Rep. Nerison's office, people talked about the dangers of unregulated high capacity wells, blue green algae, wetlands, and phosphorous contamination of waterways. We also expressed strong concerns about the lack of understanding of and support for basic science, the DNR, DNR scientists, and fundamental logic and reality among members of the Republican party.

After the meetings and speakers, participants walked the halls with their "Water = Life," and "Support the Public Trust Doctrine!" signs ending in the Rotunda.

As a fitting bookend to the day's activities and lessons, George pointed out that among the Wisconsin heroes highlighted in a large rotunda display, ‘A Century of Stories – Celebrating 100 years at the Capitol.' Scott Walker is included for his heroic fight against public school teachers resulting in public bullying, a reduction of their pay and benefits, and fewer young people wishing to serve as teachers through the passage of ACT 10.