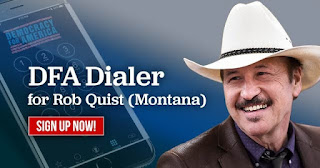 [From Democracy for America]

Voters in Montana are fired up and ready to throw Republicans out of office. And they love Rob Quist.

Rob is a true progressive populist -- he supports Medicare for All, he's pro-choice, and he opposes Citizens United. And he is running an incredible campaign right now. He has been holding listening sessions and rallies in counties all over Montana, and his message is clearly resonating.

Rob's opponent is one of the Republicans' weakest recruits -- a New Jersey tech billionaire and perennial failed candidate who lost in November to a Democratic governor even as Trump won the state. So we know that this race is winnable.

DFA members are having a real impact this special election: Together, we made more than 13,000 calls for Rob Quist on DFA Dialer last weekend alone. Can you hop on DFA Dialer this weekend to help set the stage for a big win in Montana?


Republicans are getting EXTREMELY nervous this race. Late last week, the Congressional Leadership Fund -- a super PAC aligned with House Speaker Paul Ryan -- announced a massive $800,000 ad buy to defeat Quist. And that's on top of the $1.2 million the National Republican Congressional Committee plans to spend in Montana between now and Election Day.

It's no surprise that deep-pocketed GOP donors are trying to get ahead of the curve on this race, after being taken by surprise by the incredible wave of Democratic grassroots momentum in Kansas and Georgia. They're not waiting until the last minute -- they want to overwhelm Quist's campaign with a flood of cash and false tv ads now.

Sign up to make DFA Dialer calls for Rob Quist and help a progressive populist pick off this GOP House seat.
Posted by cathy at Wednesday, April 26, 2017