Two candidates for Wisconsin Supreme Court attended and spoke at Monday evening's La Crosse County Democratic Party meeting. Madison attorney, Tim Burns, talked about his humble roots, his background as an attorney taking on big insurance companies and his desire to represent fairness for all citizens as a Supreme Court judge. Rebecca Dallet is a Milwaukee county judge who was a Milwaukee county assistant district attorney and a special assistant United States attorney before that.

Both talked about their backgrounds and values and some challenges they see in the current supreme court. One issue both talked about was the need for an improved recusal policy.

Others agree which is why Common Cause Wisconsin is partnering with the League of Women Voters of Wisconsin to hold three public hearings around the state on the need for stronger recusal rules. (Unfortunately, Common Cause apparently believes that Wisconsin's western border ends at Madison since none of the three hearings are scheduled west of that city).

If you can attend the October 24 Madison event (or the October 2 event in Green Bay or October 11 in Milwaukee), please do. OR better, if you are connected to Common Cause Wisconsin and/or LWV, please lobby those groups to hold a fourth hearing in La Crosse.

The sad reality is that "care one whit about the state's supreme court races or the court's recusal rules" is probably near the bottom of most voters' list of things they want to spend time on. A determined and well-organized right wing took over our state court after a decade of big dark money, questionable campaign ads, recount shenanigans, and low voter turnout. Somebody needs to start caring about this stuff.

Here are more details from the organizers:


CC/WI Has Organized Three October "Public Hearings" on the Issue:
in Green Bay, Milwaukee and Madison

Last April, the Wisconsin Supreme Court embarrassed itself and every citizen of our state when it discussed in “open conference,” and then voted 5 to 2, to reject a timely, reasonable and needed proposal that would have established reasonable thresholds for recusal for elected municipal court judges, circuit court judges, state court of appeals judges and state Supreme Court justices in cases where they received campaign contributions from a defendant or plaintiff appearing before them, or were the beneficiaries of spending by an “outside” special interest group.
We think this issue is far too important to simply be swept under the rug and forgotten. Therefore, Common Cause in Wisconsin has organized three "public hearings" on the issue to occur in October. On October 2nd, we will be in Green Bay and on October 11th in Milwaukee. Finally, we will hold a public hearing on October 24th in Madison, where two current Wisconsin Supreme Court Justices will talk about why more effective recusal rules are essential.
Wisconsinites would be surprised to know that our state is considered among the four worst states in the nation with regard to the strength of our recusal standards for campaign contributions. In fact, we have none, and the current state recusal “non-standard" was written by Wisconsin Manufacturers & Commerce, which has spent millions of dollars over the years to elect conservative state supreme court justices. The “standard” was adopted verbatim by a 4 to 3 vote, seven years ago. It essentially says that each justice may decide for themselves whether to recuse in a case involving a party contributing to her or him.
Since that time, contribution limits to candidates have vastly increased and outside spending has risen exponentially. Public financing for state Supreme Court candidates who voluntarily agreed not to accept campaign contributions was repealed (in 2011) and now more money than ever before dictates the outcome of state Supreme Court elections and, increasingly, elections for state Court of Appeals, circuit court and even municipal court. Furthermore, the Wisconsin Legislature and Gov. Scott Walker enacted into law drastic changes to Wisconsin campaign finance law in 2015 that legalized campaign coordination between outside special interest groups and candidates. That means that “anything goes” and there is no wall between candidates and their financial backers. 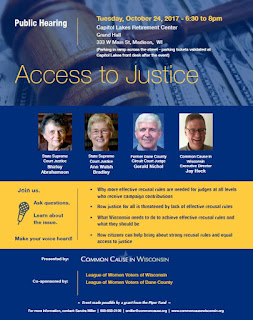