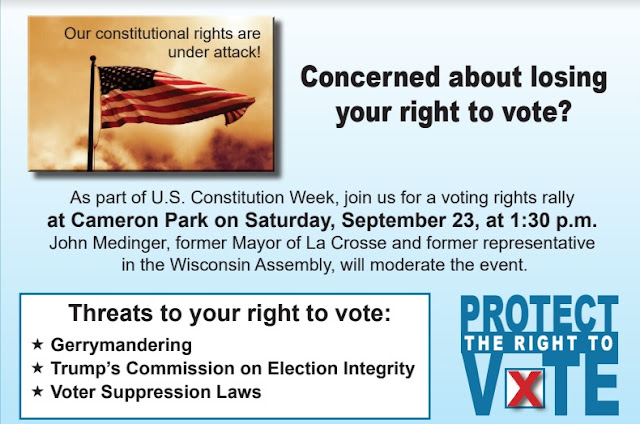 Just a reminder about Saturday's rally in Cameron Park. Following the rally, you can move to the Brickhouse just across the street to talk to Democratic gubernatorial candidates and their representatives about their campaigns.

Here is a great overview and description of why this is so important by Prof. Mike Smukstra, Viterbo University (retired), one of the speakers.

In early October, the Supreme Court of the US will hear a case to decide whether or not the hyper-partisan gerrymandering practiced in secret using high tech software allowing them to literally pick their own voters (and disenfranchise majority Democratic voters) is legal or not. One of the plaintiffs will be a featured speaker. This June 2017 Time Magazine article, Why Wisconsin is Not a Democracy, explains the issue well. This Journal-Sentinel article from 2012 digs into the details: Lawmakers were made to pledge secrecy over redistricting.

The Pence-Kobach Commission on Election Integrity has drawn criticism and scorn since its inception. Beginning with a frightening demand that states turn over private voter data to the panel and continuing to the ethically challenged Kris Kobach's decision to illegally use his private email account for his committee work, they daily demonstrate their disregard for the laws and their single minded goal - disenfranchising as many voters as possible.

Voter suppression laws, like Wisconsin's extreme voter ID requirements, are another part of the Republican - permanent minority rule - strategy. Earlier this year, a Nation magazine analysis concluded that Wisconsin's voter rules may have kept 200,000 eligible voters from casting ballots in the 2016 presidential election. Voter ID, dropping people from the voter registration rolls, limiting or eliminating opportunities for absentee voting, making it more difficult to register ... all these methods have been systematically rolled out across the country. This article chronicles the role ALEC and other right-wing organizations have had in making it harder for people to vote. (Voter Suppression 101 from The Center for American Progress).

These three issues will be addressed at the rally, but there are others.

Disenfranchisement of felons: The Sentencing Project notes that, "1 of  every 13 African Americans has lost their voting rights due to felony disenfranchisement versus 1 of every 56 non-black voters." More than six million people who have served and completed sentences are now ineligible to vote. A 2014 Democracy Now! report (Jim Crow Returns: Interstate 'Crosscheck' Program Could Strip Millions of the Right to Vote) details how states' Republican Secretaries of State, using a Republican computer program, knock eligible voters from the voting lists when their names and/or personal information appear to be similar to data from felons, often in other states.

Hacking of voting machines: Long before the Russians got involved, computer scientists warned that electronic voting machines, many owned by Republican consultants, were insecure and could be hacked. Black Box Voting, an organization founded in 2003, has long documented and warned of problems. The 2008 Emmy nominated HBO documentary Hacking Democracy follows them as they prove currently used machines can be hacked  (reducing at least one election official to tears).  And this summer at DefCon, an annual hacker convention in Las Vegas, many breaches and vulnerabilities were demonstrated.

Closing/Moving polling places: Remember those heartbreaking videos of voters waiting five, six, seven, eight hours to vote in 2008 and 2012? It's still happening and, as this Atlantic magazine article notes, it's not a fluke, it's by partisan design. (No One in America Should Have to Wait Seven Hours to Vote). It's still happening. Polling places close, voting machines or other equipment and supplies don't work or aren't there, poll workers show up late. The Nation magazine, last November, noted that, There are 868 Fewer Places to Vote in 2016 Because the Supreme Court Gutted the Voting Rights Act.  Even in La Crosse, 2016 redistricting has made some polling places very inconvenient for many voters (including many low income and elderly voters) with some polling places located outside the district they are to serve.

There are glimmers of hope. The Supreme Court will hear mathematical evidence of the undemocratic outcomes of the Wisconsin gerrymandering and may use this as a precedent-setting case to strike down hyper-partisan gerrymandering. The involvement of Russian hackers in the 2016 election (including Wisconsin's election*) may shine more light on the problems of hackable voting equipment. But with the Department of Justice, House, Senate, White House and Supreme Court under the control of extreme right wing Republicans, there is a steep hill to climb.

*Some might argue that the Jill Stein requested and paid for Wisconsin recount of the 2016 election proved that there was nothing wrong with Wisconsin's vote. In La Crosse and other counties where paper ballots could be and were individually hand counted, outcomes were actually verified by the recount. But remember that a hand recount of the whole state was denied by a Dane county judge allowing some counties to "recount" by simply rerunning ballots through machines. "Stein’s campaign has argued that if voting machines were tampered with, using those same machines to re-tabulate the votes “risks tainting the recount process.” It's interesting to note today, now that Wisconsin and 20 other states have been notified their voting systems were hacked, that the judge's ruling against a hand recount was based on her opinion that Stein failed to show that using machines to conduct a recount would likely produce incorrect results and that there’s a “substantial probability” that recounting the ballots by hand or another method will produce a more correct result — and change the outcome of the election.
Posted by cathy at Friday, September 22, 2017