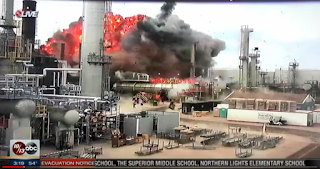 On April 26th, 2018, an explosion rocked the Husky Refinery in Superior, Wisconsin that resulted in a dangerous fire. In the aftermath, it was discovered that had the accident unfolded in a slightly different matter, it could have killed many of the residents of Superior, WI and Duluth, MN. fire. The refinery has effectively been shut down since the event due to the extent of the damage from the explosion and fire.

Now Husky is applying for an air pollution control construction permit from the Wisconsin Department of Natural Resources. This permit would allow Husky to begin the construction required to not only bring the plant back online, but also to expand.
The Chemical Safety Board has yet to issue a final report on the cause of the explosion. The Duluth City Council has urged the WI DNR to review the use of hydrofluoric acid at the plant. Nevertheless, the WI DNR has only allowed 30 days for the public to review and comment on this permit application.
We are asking you to take action TODAY.
Right now.
The Department of Natural Resources and your elected officials need to hear from YOU that the public is concerned about this plant re-starting operations.
TALKING POINTS:
CONTACT INFORMATION:
RONALD BINZLEY
Wisconsin Department of Natural Resources
Bureau of Air Management
(608) 264-9243

Stop the Husky Refinery from taking more dangerous action in the Twin Ports by voicing your concerns. CALL NOW before it's too late.