Cross-posted from Sierra Club with updates 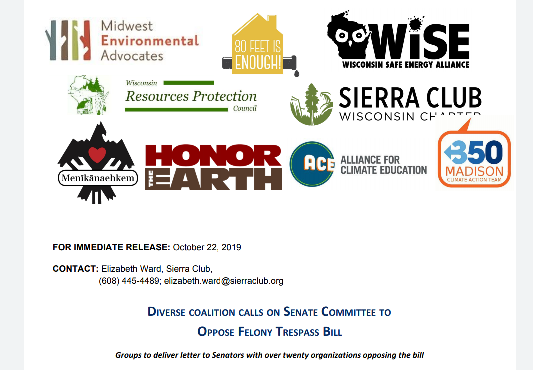 The recent passage of Assembly Bill 426, which would provide felony penalties for protests near oil and gas pipelines and other "energy provider" sites is alarming. The bill now moves to the Wisconsin Senate as SB 386. A hearing on the Senate bill was held on October 22. This is one of many such attempts around the country to prop up the fossil fuel industry and tamp down protests. Unfortunately, some Wisconsin Democrats are co-sponsoring.

According to the International Center for Not-For-Profit Law, under the ALEC-inspired legislation, "... trespass onto the property of any 'company that operates a gas, oil, petroleum, refined petroleum product, renewable fuel, water, or chemical generation, storage, transportation, or delivery system' would be a Class H felony, punishable by six years in prison and a fine of $10,000. Accordingly, protests in a range of locations could be covered, whether on land containing a pipeline or the corporate headquarters of an oil company."

The Bad River Band of Lake Superior Chippewa is suing to force Enbridge to remove its pipeline from tribal land (the easement expired in 2013), but this new law would potentially conflict with hunting and fishing treaty rights and criminalize treaty-guaranteed rights and tribal sovereignty. A diverse coalition of groups, including the Sierra Club and tribal governments oppose the legislation. Read their letter to Senators. Use it to make your own letter or phone call script.

A similar bill enacted in Sorth Dakota has been successfully challenged by the ACLU with the state agreeing to not enforce and to compensate plaintiffs' attorney fees.

Read about the bill and contact your state senator and Governor Evers.