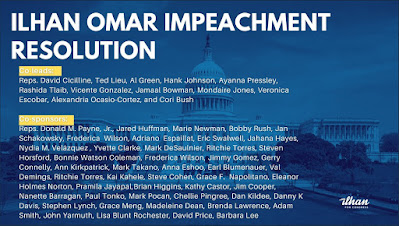 First, Rep. Ilhan Omar has drafted new articles of impeachment. So far, Rep. Ron Kind is not on the list of supporters. So, PLEASE CALL KIND'S OFFICE NOW and tell him to support this effort. Even Nancy Pelosi says she supports impeachment if VP Pence doesn't invoke the 25th amendment.

Next, sign Indivisible's form to impeach, convict, and disquality Trump from ever holding office again.

Then, start right now on the next election. Going into the new year, there are razor thin margins of Democrats in the House and Senate, including many who are definitely not on board with the programs and changes needed to combat the climate crisis, reform the judicial system and policing, change foreign policy, prioritize economic fairness, and provide healthcare for all. In fact, too many Dems are not even on board with dumping the filibuster, ensuring that even in his minority role, Mitch McConnell will be able to scuttle lots of legislation making Democrats appear weak and reducing chances of their maintaining control after the 2022 midterm elections.

The Gaslit Nation Action Gudie is a great place to start. In fact, if you are not a regular listener to this podcast, start listening now. Sarah Kendzior (The View from Flyover Country and Hiding in Plain Sight) joins Andrea Chalupa (Mr. Jones) to tell us what's going to happen next based on their expertise and scholarship on authoritarian regimes. "This is a transnational crime syndicate masquerading as a government."

This is not over [Updated] Rep. Tom Tiffany and Rep. Scott Fitzgerald have both made clear where their loyalties lie by challenging certified votes. A January 7 poll found that 45% of Republican voters support the storming of the Capitol. State Republicans are forcing colleages and employees to work in a dangerous and toxic environment where the COVID-19 virus will freely spread among the unmasked. Not to mention their NO-relief COVID legislation.

Trump has two weeks to act. There are also reports of the pardons still to come for crimes maybe yet to be committed.

But, whatever happens to Trump, his QAnon backers and elected legislators, state and national, are just getting started.