Rep. Ron Kind has finally signed on to support impeachment according to a January 12 notice from Indivisible.

Now he must also support Rep. Cori Bush's first legislation (HR 25). "Directing the Committee on Ethics to investigate, and issue a report on, whether any and all actions taken by Members of the 117th Congress who sought to overturn the 2020 Presidential election violated their oath of office to uphold the Constitution or the Rules of the House of Representatives, and should face sanction, including removal from the House of Representatives." And that would include Wisconsin Trumppets, Tom Tiffany and Scott Fitzgerald.

New reports are emerging of Republican  Representatives helping to plan the the attempted coup, helping the plotters identify important offices and individuals, and helping to incite the mob. More on the plot from elected and prominent Republicans' involvement is coming.

Rep. Kind must also urge and vote for "the 14th amendment solution" to neuter Trump's future political aspirations. "I know you are disappointed but I also want you to know that our incredible journey is only just beginning."

Again, if you want to know what's happened and what's coming next, listen to the podcast GASLIT NATION. Experts on authoritarians and international crime syndicares are like a crystal ball. It isn't over. 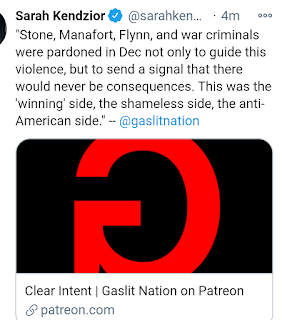 Oh yes, and in Wisconsin, the plot to assign electoral college votes by hyperpartisan gerrymandered congressional district results (rather than the state-wide popular vote) continues.