Honor the Earth tickets on sale 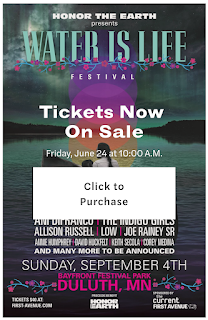 Tickets are now on sale for the Honor the Earth Festival which will be in Duluth on Sunday, September 4.

Honor the Earth is one of the many groups and initiatives (co-)founded by Ojibwe activist and economist, Winona La Duke.

"Our mission is to create awareness and support for Native environmental issues and to develop needed financial and political resources for the survival of sustainable Native communities. Honor the Earth develops these resources by using music, the arts, the media, and Indigenous wisdom to ask people to recognize our joint dependency on the Earth and be a voice for those not heard.

"As a unique national Native initiative, Honor the Earth works to a) raise public awareness and b) raise and direct funds to grassroots Native environmental groups. We are the only Native organization that provides both financial support and organizing support to Native environmental initiatives. This model is based on strategic analysis of what is needed to forge change in Indian country, and it is based deep in our communities, histories, and long-term struggles to protect the earth."

Over the past 29 years, HtE has re-granted more than $2,000,000 to more than 200 Native communities. The annual Honor the Earth festival serves to celebrate accomplishments, plan for coming actions, network, motivate, and raise energy, funds, and resources.

The event will be held at Duluth's Bayfront Festival Park. It will be general admission standing room only. The park is ADA compliant/wheelchair accessible.