Subscribe here to get updates when new info is posted. 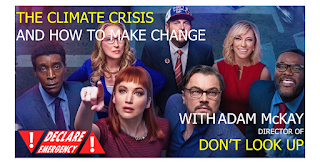 “We’ve got 6-8 years before the climate is so chaotic, we live in a permanent state of biblical catastrophe. And still we’re walking around like it’s 1997 and we’re at a third Eye Blind concert. I’ll never ever get used to how frickin crazy it is to be alive right now.” ~ Adam McKay, Director of Don’t Look Up.
“We have to act quickly. What we do, I believe, in the next three to four years will determine the future of humanity” ~ Sir David King, former chief scientific advisory to the British Government, 2021.

In other words, the next 2-3 years are pivotal to save the planet and prevent the deaths of hundreds of millions of people from extreme heat, drought, floods, disease and poverty.

Film Director, Adam McKay, like so many of us, is terrified. We are staring catastrophe in the face and ignoring it for short-term political gain and corporate profit. Adam directed the film Don’t Look Up, the biggest film on the climate crisis in a decade. In its first 11 days, it became Netflix’s third most-viewed film ever, and 250,000 people on IMDB gave it a strong average rating of 7.3. What more can we say?

Declare Emergency is delighted to host Adam McKay speaking about the climate crisis and the best way to force our government to take rapid action to fight it.

After Adam speaks, environmental activist and co-founder of Extinction Rebellion, Roger Hallam, will speak about civil disobedience campaigns currently mobilizing across the globe. Details about how to support and join in service to this amazing campaign will follow. We will then go into breakout rooms to discuss what we have heard on the call.

>> Register in advance for this meeting <<

After registering, you will receive a confirmation email containing information about joining the meeting.

The most recent IPCC (Intergovernmental Panel on Climate Change) report issued a warning that we have a brief and closing window to avoid catastrophic consequences, stating it is “now or never” to take drastic action. Our government's lack of response to this emergency is genocide. We all must act now. We believe you feel the same and are eager to learn about what you can do to that is proven successful in the face of adversity.