La Crescent 4 Bernie Organizing Meeting Kendra is hosting a Bernie event on August 24 from 5:30 to 7:30 pm.. at the Sports Hub, 25 N Walnut, La Crescent. If you live in the La Crescent area or have friends or relatives or co-workers there, please let them know about this event! Minnesota's caucuses happen early (March 1) so organizing there is very important! This is an official Bernie event. RSVP: http://bit.ly/1PalbqE

Door knocking in Dubuque Bernie national has just announced a weekend of Bernie action in Iowa, August 28-30, and they are looking for Wisconsin volunteers to help! If you can spare a day or a weekend to canvass for Bernie, sign up http://bit.ly/1KAkIup at AND REPLY TO THIS POST so people going can try to put a carpool together.

Make your own Bernie sign/shirt! Saturday, August 29 from 10 a.m. to 1 p.m. at Cameron Park (near the Bernie table!) Bring your own shirt, boards, cardboard, paint, etc. We will have some supplies and many ideas. This is an official Bernie event! RSVP at http://bit.ly/1E8OGJ1

MARCH for Bernie Wear your Bernie togs, bring your Bernie signs, and march with the La Crosse County Democrats in the annual Western Wisconsin AFL-CIO Labor Day parade on Monday morning, September 7. Find the Dems near Gillette and Sill Streets at about 9:45 a.m. Parade starts at 10 a.m. and ends ten blocks later at Copeland Park. Work the park crowd for Bernie and, if you want, attend a brief Walking for Bernie meeting at about 11:30 at the park. This is an official Bernie event! RSVP here: http://bit.ly/1fyklbc


Ongoing Tabling We are tabling at Cameron Park Friday evenings and Saturday mornings. We have added a few other times to coincide with the La Crosse Bike Festival and hope to add even more this fall. If you want to sign up to table right now, go to tinyurl.com/LaXTable4Bernie. If you want some training before you sign up, please email Cathy.


Create an Event!  It's easy to create your event! The Bernie organizing site has some great ideas and resources and we have some veteran organizers in our group who can help with your planning and implementation (and be sure to let us know about your event!)


BERNIE ROAD TRIPS  William, Jackie, Carrie, John and Aaron took a trip! From Facebook: We had a lot of fun on our road trip to Dubuque. Loras College has some really nice facilities. Bernie Sanders gave another great speech. The stamina he shows is very impressive, as he has had some marathon days this past week. [August 15], he was a guest on Meet the Press, he "officially" opened his Cedar Rapids Field Headquarters, he visited the Scott County Democrats Picnic (3,000 in attendance), he attended a labor meeting in Clinton (IAFF Local 609 Union Hall), and finally, he capped off the day with the Dubuque Town Hall Meeting (2,000-2,500 in attendance). Read more at LaCrosse4Bernie on Facebook.


Cathy, Avery and Austin went to the Iowa State Fair on Saturday and got to HEAR Bernie while looking at lots of backs! However, after the speech, Avery was hanging out in the shade and suddenly she was surrounded by people and there was Bernie sitting at a nearby picnic table and talking to the press! (see her pic above) 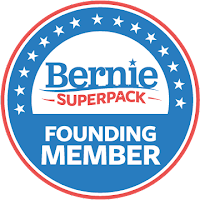 LAST DAY TO BE BERNIE SUPER PACK FOUNDING MEMBER  From Bernie national: So far, over 50,000 individuals have made a monthly recurring contribution to our campaign. Today's the last day to get a "Founding Member" sticker to show you're a part of Bernie's Super PACK. Are you in?


Add your $3 monthly recurring contribution today and we’ll send you this Bernie Super PACK founding member sticker—the last day for this offer. While our grassroots fundraising numbers are historically large, so is the amount of money billionaires are pouring into Super PACs for Hillary Clinton, Jeb Bush, Ted Cruz and almost every other declared candidate. That’s one of the reasons your recurring contribution is so important: it allows us to scale our plan secure in the knowledge that we’ll have the resources needed to win in Iowa and New Hampshire, and capture the delegates required for the Democratic Party nomination.


LAX4BERNIE TEAMS - ARE YOU SIGNED UP? Three FOUR groups are working on the Bernie campaign right here and right now! Please sign up! We need active volunteers for the OUTREACH team, the MEDIA team and the HOME team. We are adding a CANVASSING team, too! Email Cathy if you want to get connected to one or more.


STUDENTS FOR BERNIE?  We have several institutions of higher learning in our area - let's help get a LA CROSSE STUDENTS 4 BERNIE group going! Do you have a connection to UW-L, Viterbo, WTC, or Globe University? If yes, can you help set up an or several student events either at your institution or in the community? It would be great if we could have regular Bernie tabling at each school for example or a Bernieversity teach in event or something that will bring young voters into the campaign. Let me know if you're interested and/or spread your ideas on our social media network. If even one student from each school could start meeting together and organizing events, the potential is incredible.

SEEKING LA CROSSE 4 BERNIE HQ! Do you have a front porch, garage, basement or spare room you could spare a few hours a week as a Bernie headquarters? It would be nice to have a centrally located space to use as a headquarters and supplies storage space. It wouldn't have to be big or open 24/7. Maybe it would be available by appointment only or only on Saturday afternoons and Wednesday evenings. Ideally it would be someplace that is secure and would hold a few people for a meeting, strategy session, canvassing training or other planning event. If you know of or have someplace like this, please email Cathy.


VOTER REGISTRATION TRAINING OFFERED IN CITY OF LA CROSSE. As we know, it's super important to make sure as many eligible voters as possible are registered to vote. Bernie will need as many votes as possible. People who wish to be certified to register voters in the City of La Crosse ay sign up for one of two training sessions offered by Teri Lehrke, the City Clerk. Please note that voter registration must be a NON-PARTISAN activity. Registrars must register anyone who qualifies and may not do any politicking while registering voters. The sessions are: Monday, August 31 at 1:30 p.m. and Wednesday, September 2 at 9:00 a.m. Both sessions will be held in the third floor conference room in City Hall, 400 La Crosse Street. Call Ms. Lehrke to register for a session: 608 789-556. THIS IS JUST FOR CITY OF LA CROSSE! If you live in another community, contact your city clerk to request a training session.


HELP LAX4BERNIE GROW! Do you know people in our area who want to help elect Bernie Sanders? Please have them email couleeprogressive@hotmail.com to be put on the mailing list and get information about local activities and opportunities to help.