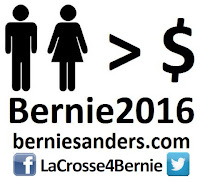 
There's still time to sign up for door knocking in Dubuque this weekend. Bernie national is looking for Wisconsin volunteers to help! If you can spare a day or a weekend to canvass for Bernie, sign up http://bit.ly/1KAkIup at AND REPLY TO THIS POST so people going can try to put a carpool together.


Make your own sign/shirt workshop Saturday, August 29 from 10 a.m. to 1 p.m. at Cameron Park (Fifth Avenue and King Street). Bring your own T-Shirts, cardboard, plywood, paint, and creativity! We will have some basic supplies available!! This is an official Bernie event! RSVP here: http://bit.ly/1E8OGJ1


MARCH for Bernie Wear your Bernie togs, bring your Bernie signs, and march with the La Crosse County Democrats in the annual Western Wisconsin AFL-CIO Labor Day parade on Monday morning, September 7. Find the Dems near Gillette and Sill Streets at about 9:45 a.m. Parade starts at 10 and ends 10 blocks later at Copeland Park. Work the park crowd for Bernie (handouts will be provided) and, if you want, attend a brief Walking for Bernie meeting at about 11:30 at the park. This is an official Bernie event! RSVP here:  http://bit.ly/1fyklbc


Ongoing Tabling We are tabling at Cameron Park Friday evenings and Saturday mornings. We have added a few other times to coincide with the La Crosse Bike Festival and hope to add even more soon. If you want to sign up to table right now, go to tinyurl.com/LaXTable4Bernie. If you want some training before you sign up, please email Cathy.

Leafletting  There are some events coming up where we won't have a table, but it would be great if Bernie folks could walk among the crowds wearing their Bernie shirts and handing out Bernie info to those who want it. I am thinking specifically of Pride Fest (Sept. 12) and Hmong New Year (Sept. 18-19). I have seen other 4Bernie groups also plan flyering cars at high school football games. HEY OUTREACH TEAM - would anyone like to see about getting something going at these important events!?

[Thanks to Obbie and Rozie for reaching out to find someone to translate a Bernie flyer for Hmong New Year!]

Create Your Own Event! Be sure to let us know about it! HEY - THERE ARE 100+ PEOPLE ON OUR LAX4BERNIE LIST! Can we at least get FIVE new events going?

OTHER EVENTS - Fighting Bob Fest will be on Saturday, September 19 in Madison. Many great progressive speakers (Russell Feingold and Ed Schultz, for example). Bernie has spoken at FBF before but so far he's not on the list.


WE HAVE A HEADQUARTERS!  Thanks to LaX4Bernie member, Jackie E., we will have a place to store things, plan things, and coordinate things very soon -- just in time for the vagaries of fall and winter weather. We're still working on details, but for now, there's definitely space to store signs and other materials. (Tabling kit will remain at its current location.) More soon!

VOTER REGISTRATION TRAINING. Get trained to register voters in La Crosse, Onalaska, and Holmen. A third session has been added (the August 31 session is now full). Sign up for one session: September 2 at 9:00 a.m. or October 20 at 5:30 p.m. Both are in the fifth floor conference room at La Crosse City Hall (400 La Crosse Street). They will last about two hours. To sign up, call Teri Lehrke, City Clerk, at 789-7556.

DISTURBING AGREEMENT BETWEEN WISCONSIN DEMS and CLINTON CAMPAIGN. A LaX4Bernie member noted this NYT article that reports on fundraising "partnerships" agreed by four state Democratic parties (including Wisconsin's) and the Clinton campaign.


The move to create the “Victory Funds” – in which the money raised would be divided between the state parties and the Clinton campaign – comes as efforts to form a joint fund-raising agreement with the Democratic National Committee have repeatedly hit snags over concerns in the Clinton campaign about the current party leadership’s controlling the money in any shared account. The national committee, which is intended to remain neutral, has been accused by Mrs. Clinton’s rivals for the nomination of taking actions that could benefit Mrs. Clinton, such as restricting the number of debates.

So, I guess if you'd prefer that your donations not be split with the Clinton campaign, you should donate directly to candidates through their ActBlue sites.

UPCOMING VOTER ID ACTION. The La Crosse County Dems are planning to update their voter lists this fall and will be reaching out for volunteers to help walk and knock and phone call. While not Bernie specific, these activities will help Bernie by helping elect people who are on board with policies for people not crony corporations. To help with walk and knock, contact Ed at 608 526-3945. If you can do calling, contact JD at 608 783-0172. If you are not a Democratic Party member, let the contact know how you heard about the program.


STUDENTS FOR BERNIE!  Now's the time to get a LA CROSSE STUDENTS 4 BERNIE group going! Do you have a connection to UW-L, Viterbo, WTC, or Globe University? If yes, PLEASE STEP FORWARD!! Can you arrange for weekly TABLING on your campus? (We can help find volunteers to staff tables.)  Can you hold an event - like a video of a Bernie rally speech? - that will bring students together to sign up for Bernie (We can help with organizing). Can you get a few students together to be Bernie Ambassadors in their residence halls or hand out flyers at a football game or write letters to your campus newspaper?    I have heard from a couple of students already - let's do some planning online and get things going. If even one student from each school could start meeting together and organizing events, the potential is incredible. For now, email Cathy and I can connect you.

LAX4BERNIE TEAMS - TIME FOR ACTION! Four groups are set up to start working on the Bernie campaign right here and right now! Please sign up! We need active volunteers for the OUTREACH team, the MEDIA team and the HOME team. We are adding a CANVASSING team, too! Email Cathy if you want to get connected to one or more. Let's get a few LETTERS TO THE EDITOR out there (even if the LaX Tribune barely publishes any letters any more).

HELP LAX4BERNIE GROW! Do you know people in our area who want to help elect Bernie Sanders? Please have them email couleeprogressive@hotmail.com to be put on the mailing list and get information about local activities and opportunities to help or forward this newsletter to them.


SUBMIT STORIES AND IDEAS for the next LaX4Bernie News.


COOLEST BERNIE SITE OF THE WEEK: Billionaires try to shut down Bernie HQ in Phoenix.

SECOND COOLEST:  Bernie addresses the higher powers of the Democratic National Committee in Minneapolis, Friday, August 28. (Bernie starts at about 56:00 on this C-SPAN broadcast, though for a real hoot, watch candidate Martin O'Malley's scorching criticism of the DNC's "debate" non-schedule (starting at 29:30)).
Posted by Cathy Van Maren at Friday, August 28, 2015