An important part of getting organized is knowing what is going on around the community so we can attend, support, and help promote. It's also good to know what's going on so we can try not to schedule something when there are already other important things scheduled, though that gets harder and harder with more and more groups and events. Spreading the word is very important, too, so even if you can't attend everything, if you have an email or friends list, please copy the calendar items and paste them into an email to them. If your event is missing, please submit it via the form or email coulee progressive at hotmail.

Also, planning has begun for the 2018 Progresstival (either last Saturday of January or first Saturday of February probably). Some folks are calling or emailing groups to see if they want to table. If no one calls or if you have a new group or if you just want to get involved early on, please email coulee progressive at hotmail.

Monday, October 2
7:30 a.m. SMRT Bus Ribbon Cutting Ok, so not many people are going to get up early in the morning to go to the bus stop by Gundersen Health Center to watch the mayor cut a ribbon in front of a bus, but this is a pretty great and big deal. You may know that a few years ago a collaboration among planners and advisors from several counties in the region resulted in a great public transportation resource to move people from La Crosse to parts of Vernon and Crawford counties including Viroqua and Prairie du Chien for $3 or less one way! Ridership for that SMRT (Scenic Mississippi Regional Transit) initiative has increased steadily since its beginning in 2013. Now, there is a NEW SMRT bus route that will go between La Crose (and Onalaska, West Salem, Sparta) and Tomah and that bus starts limited service on Monday. The SMRT website - www.ridesmrt.com/ - is not updated, but you can read details about stops on the new route below (from the Gundersen Health System employee newsletter of Sept. 27).

6:00 p.m. FILM: The Babushkas of Chernobyl  This is the first film screening of the UWL Ethnographic Film Series for 2017-2018. Dr. Elizabeth Peacock (archaeology/anthropology) will introduce the film and facilitate a post-film discussion. The film will be shown in the UWL Student Union Theater.

Friday, October 6
11:00 a.m. Dedication of Karen's Classroom at Myrick Park  A new outdoor ampitheater has been constructed by Coulee Region Ecoscapes on the north side of the Myrick Park Center overlooking the marsh. The structure is a memorial to Karen Ringstrom, a local environmental educator and activist who passed away last year. I can't find a link to it except on the city hall calendar, but even if there isn't a dedication, you can still enjoy this great new resource.

You can still SIGN UP FOR THE PROGRESSIVE MEDIA PROJECT OP-ED WRITING WORKSHOP - all day Friday, October 13 at the Ho-Chunk Three Rivers House. The workshop is FREE including meals and guidance from professionals with The Progressive magazine.

Also, if you normally work for, donate to, and/or vote for Democratic candidates, now is the time to JOIN YOUR LOCAL DEM PARTY. In La Crosse, board nominations will be taken at the October 16 meeting. This is YOUR chance to actually have a say in who is running the party and what are the party's priorities. In addition, there is a FALL FUNDRAISER for the Dems on Saturday, October 21 starting at 5 p.m. at the Concordia Ballroom on La Crosse Street (link coming soon). The money raised here will be used to open a campaign headquarters for important 2018 races. All the other groups are fine, but THIS is the group that generates the candidates. JOIN. 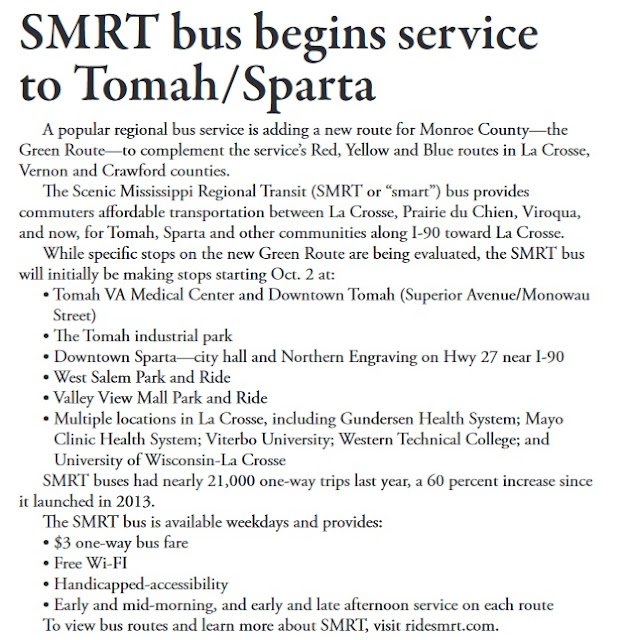