Please plan to attend at least one event this week if you can! If your event is missing from this list, please use the form to let us know or email couleeprogressive at hotmail. 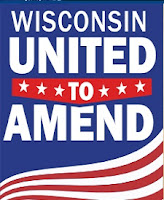 5:30 p.m. City of La Crosse Judiciary and Administration Committee The committee meeting starts at 6 p.m. but please come before then so you can register to show support for a spring ballot resolution in favor of ending the Citizens United understanding that corporations are people and money is speech. We've also heard that there may be a resolution brought to the committee asking the City to follow the lead of the La Crosse County Board in going on record against hyper-partisan gerrymandering. And we've also heard that some Council members may be opposed to such resolutions. So, the more people who show up in support, the better. [UPDATE: SEE MEDIA ADVISORY BELOW.]

6:00 p.m. La Crosse Arts Board and Human Rights Commission Public Discussion to examine public art and its role in promoting social justice. "This session’s purpose is to gather information to analyze social justice challenges and opportunities in the city’s public artwork, events, and more." The session will be at the Ho-Chunk Three Rivers House (8th and Main)

7:00 p.m. Coulee Region Women in Elected Positions will include local women leaders talking about their experiences running for and serving in government. The program will be in the basement of Eagle Residence Hall, 1500 La Crosse Street, UWL (park in the UWL parking ramp or take the #4 bus)

4:00 p.m. League of Women Voters Voter Services Committee Meeting Interested in Voting Issues? Want to become active in educating the public about Voter Registration or Voter ID requirements? The Voter Services committee is active in providing these opportunities to the public.  All are welcome! 1818 Redfield Street

La Crosse United to Amend will present petition with more than 3,600 signatures to City's Judiciary and Administration Committee on December 5
Members and supporters of a resolution declaring corporations are not persons and money is not speech will present their petitions to the City's Judiciary and Administration Committee at 5:30 p.m. on Tuesday, December 5 at the City's Council Chambers. City Clerk Teri Lehrke has certified more than 3,6000 signatures (20 percent more than required) on the petitions ensuring an April 3 referendum on City of La Crosse ballots. La Crosse United to Amend will present the certified petitions to the J&A Committee with a recommendation that the city endorse the referendum.
La Crosse United to Amend is a local non-partisan organization, over 60 members strong,  dedicated to making the public aware of the threat the 2010 U.S. Supreme Court decision, commonly known as Citizen’s United, poses to American democracy. This decision allows large organizations to give unlimited amounts of money to elected officials without disclosure and has drastically altered the course of government. "As a result, our voices, as individuals, have been greatly diminished," says Pam Knudtson, the organization's chair.
The group began collecting signatures on September 3 and easily gathered far more than the 3,000 required well before the 60 day deadline. If a group gets 15 percent of the number of persons who voted in the last governor's race in their municipality to sign a petition for the referendum, the city must put the referendum on the ballot in the next election or pass the resolution. La Crosse United to Amend hopes the City will put the resolution on the April ballot to provide more opportunity for the group to educate the public about the "We the People Amendment," which clearly states that a corporation is not a person and money is not speech.
La Crosse would join more than 115 other municipalities in Wisconsin who have already passed this resolution by overwhelming margins. Nineteen states have also passed it.
The full City Council will receive the petitions and recommendation on December 14.
Posted by cathy at Sunday, December 03, 2017