Rep. Ron Kind will meet with local advocates of the Green New Deal on Wednesday morning, February 20, between 10:45 and 11:15 a.m. on the UWL campus

(exact location will be posted here as soon as it's available).

We are asking ALL local GND supporters to show up to this meeting.
IF YOU CAN'T COME IN PERSON, print and circulate this petition for signatures
then email couleeprogressive@hotmail.com to get them for delivery

If you need to educate yourself about the scope, purpose, and priorities of the GND, read about it at Sunrise Movement, Sierra Club, 350.org, Union of Concerned Scientists, and many others. New co-sponsors are signing on every day. As of now, there are 84 co-sponsors in the House (not Ron Kind yet) and 11 in the Senate.

Here are a few good articles about it:From Wired: The Green New Deal Shows How Grand Climate Politics Can Be
From The Intercept: The Battle Lines Have Been Drawn on the Green New Deal (by Naomi Klein)
From the Atlantic: The Democratic Party Wants to Make Climate Policy Exciting

To see what the opposition looks like, read just about any day's La Crosse Tribune Opinion page. There's a bottomless pit of patronizing, climate-denying pundits (and cartoonists) working to defeat this pledge to finally take the threat of catastrophic global warming seriously and work to do something about it by calling supporters naive, crazy, radical, out of touch, and worse.

We say, the ones who really are crazy, radical, and out of touch are those who compare saving the planet for future generations to a "magic pony ride."

From Data for Progress 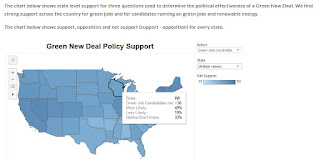 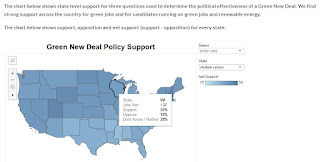