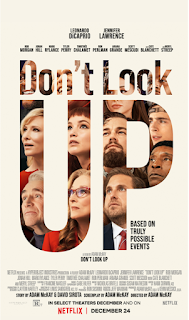 Critics of "Don't Look Up" are Missing the Entire Point, by Nathan J. Robinson in Current Affairs. "It's not about Americans being sheep, but about how billionaires manipulate us into trusting them, how the reckless pursuit of profit can have catastrophic consequences, and the need to come together to fight those who prevent us from solving our problems." 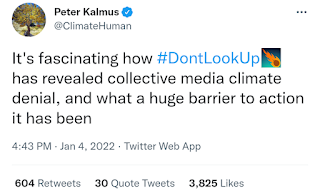 "Much like it’s become politically expedient for some (in particular, the Republican Party and the polluters they coddle) to ignore the overwhelming science behind human-caused climate change despite the fact that the impacts have become so obvious you just need to look at your television screens to see them playing out in real time (and yes, while the screenplay was written before the COVID-19 crisis, there are similar lessons here too when it comes to ideologically-motivated science denial)." - Michael Mann on "Don't Look Up": DO see this film!

While the film is fast and funny, for me, as for many environmental activists and climate scientists, it seemed all too real. I felt as if I were watching my adult life flash past me. As the scientists in the film, trying to draw attention to the approach of a planet-killing comet, bashed their heads against the Great Wall of Denial erected by the media and sought to reach politicians with 10-second attention spans, all the anger and frustration and desperation I’ve felt over the years boiled over.

Above all, when the scientist who had discovered the comet was pushed to the bottom of the schedule by fatuous celebrity gossip on a morning TV show and erupted in fury, I was reminded of my own mortifying loss of control on Good Morning Britain in November. It was soon after the Cop26 climate conference in Glasgow, where we had seen the least serious of all governments (the UK was hosting the talks) failing to rise to the most serious of all issues. I tried, for the thousandth time, to explain what we are facing, and suddenly couldn’t hold it in any longer. I burst into tears on live TV. - George Monbiot, "Watching Don't Look Up made me see my whole life of campaigning flash before me," The Guardian, January 4, 2022