Who We Are /How We Got Here 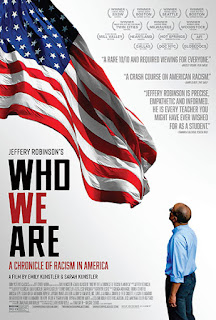 Friday's broadcast of Democracy Now! included a segment about a new documentary opening in theaters this weekend, Who We Are: A Chronicle of Racism in America. The film, directed by Emily and Sarah Kunstler, is written by and features former ACLU Deputy Legal Director Jeffery Robinson, whose talk on the history and continuing legacy of anti-Black racism and White supremacy provides the framework.
Despite the progress made in the past sixty years, there are still miles to go in voting rights, fact-based education, fair and equal treatment under law, economic justice, and more.
We hope to support a community screening of this important film in the coming weeks. If you would like to help sponsor, please email couleeprogressive@hotmail.com. Watch the DN! segment and visit the Who We Are Project website for more information.
Another great documentary that details the ongoing struggle between wealthy elites and advocates of democracy is Requiem for the American Dream, a 2015 documentary, that features Noam Chomsky and traces policies put in place by wealthy White men from the constitution though the present day. The companion book, subtitled, "The Ten Principles of Concentration of Wealth and Power," digs into the strategies, honed since the 1970s, elites have used and are using to reframe the United States to their own interests.
The book highlights and expands on the ten principles: reduce democracy, shape ideology, redesign the economy, shift the burden onto the poor and middle classes, attack the solidarity of the people, let special interests run the regulators, engineer election results, use fear and the power of the state to keep the rabble in line, manufacture consent, marginalize the population. As we watch the continuing coup of 2020, the unraveling of fundamental rights and policies by the right-wing Supreme Court, and the attacks on voting rights and vote-counting mechanisms, these resources are essential to prepare for the coming nightmare.
You do realize that if the House of Representatives goes to the Republicans in 2022, they plan to install Donald Trump as Speaker and hold non-stop Biden impeachment hearings. This is an emergency, and these two documentaries explain why.
This year we are back on the front lines with Dr. King, fighting once again for voting rights and for economic justice.

From "Where Do We Go From Here?" delivered by Rev. Dr. Martin Luther King, Jr. to the Southern Christian Leadership Conference, August 16, 1967.