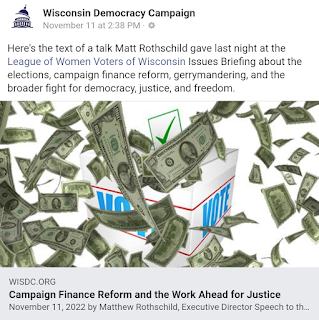 Speech to the League of Women Voters of Wisconsin delivered November 10, 2022

Good evening! I’d like to thank the League of Women Voters of Wisconsin for inviting me to speak with you tonight, and I also want to thank Ellen and Melanie for putting the arm on me.

Instead, it splattered mud on all our screens, and I’m sure you were as sick of that mud as I was.

Some of those ads, I need to say here at the outset, were reprehensible and racist, especially the ads paid for by a group called Wisconsin Truth PAC, which was founded by and primarily funded by three billionaires: Diane Hendricks of ABC Supply, the richest woman in Wisconsin who is infamous for urging Scott Walker to turn Wisconsin into a red state and a right to work state; and Richard and Elizabeth Uihlein of Lake Forest, Illinois, who own the Uline corporation, and are huge donors to Republican candidates across the country.

Diane Hendricks and the Uihleins also happen to be the two families that reaped $200 million each in just one year alone from that tax benefit that Ron Johnson insisted on putting into the tax code.

And it smacks of corruption.

Let me give you another example. In the Tim Michels race, he self-funded, providing $17 million to his own campaign, or about 75 percent. And who among us can do that? But he also leaned on his brothers.

They each maxxed out in their direct donations to him, giving his campaign $20,000 each, the legal limit, which is way too high a limit. It’s about six or seven times the amount you can give your favorite candidate for President, for instance.

And what did the Michels brothers do once they had maxxed out?

They then turned around and gave $1.5 million each to the Republican Party of Wisconsin, which, shortly thereafter, gave Michels $3 million and change.

Basically they turned the Republican Party of Wisconsin into a laundromat.

And they made a mockery of the limit we impose on contributions to candidates.

But the problem of money in politics is a bipartisan problem.