Just a note that Citizen Action of Wisconsin is still looking for a couple dozen Wisconsin citizens to kick in $20 per month (more or less depending upon your circumstances) in order to fund a full time HEALTHCARE FOR ALL co-op organizer who will work across the state to push for better, accessible, affordable, equitable health care. More details here. Their deadline is AUGUST 15 (not the 20th as previously stated).

And, if you want proof that Citizen Action ("heroes of the week," according to the Shepherd Express) is on top of the important issues in our state and not afraid to speak out, check out this testimony by Dr. Robert Kraig, Executive Director of Citizen Action of Wisconsin, before the Wisconsin State Assembly during the special session to consider whether or not to hand over $3 BILLION to a Foxconn, a Chinese based tech giant (that still hasn't met its 2013 pledge to create lots of jobs in Pennsylvania), so 13,000 people (probably, many from Illinois) can make electronic display panels. 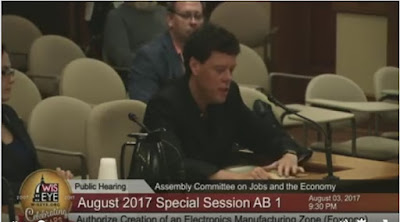 "If you look at metrics for spending $3 BILLION, you should be producing a lot more jobs. ,,, For example, according to a University of Massachusetts study, if you made a  $3 BILLION investment in education, because education is labor intensive, you would produce 87,300 jobs. That dwarfs the highest estimates we're hearing for this, for Foxconn. If you did it in healthcare, it'd be 58,800 jobs. Again, healthcare is labor intensive and we all need healthcare. ... And then as far as clean energy, you would produce 56,300 jobs - clean energy and renewable energy. So, we could make these investments now. We could have made them years ago."
Posted by cathy at Tuesday, August 08, 2017