Thanks to those who came out to vote last night. The new LCDP board seems determined to find ways to broaden its membership, support critical initiatives and progressive legislators, and continue working on making sure everyone eligible is able to vote. 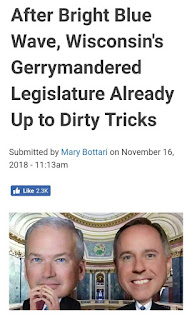 Protecting democracy in Wisconsin is an ongoing struggle it seems. Despite winning statewide elections in November, Dems failed to gain a single seat in the Wisconsin legislature. The results may have strengthened the case of Wisconsin voters whose suit suit before the US Supreme Court challenging hyperpartisan gerrymandering was returned to lower courts earlier this year, but for now it means the gerrymandered minority is turning to increasingly desperate tactics to maintain power.


"We’ve now seen four election cycles in which the result of what the voters wanted is not reflected in the seat allocation in the Legislature," - Sachin Chheda, director of the Fair Elections Project

Common Cause Wisconsin, quoting a PR Watch report on a proposed lame duck legislative session, is sounding the alarm and urging people to call their state legislators:


... let your own State Senator and State Representative know that you oppose this "extraordinary session" because it defies the will of the state's voters, is a colossal waste of taxpayer money and will only increase partisan acrimony, not reduce it. If you are not sure who your State Senator and your State Representative are, you can look them up here.

Also, let Speaker Vos and Senate Majority Leader Fitzgerald know what you think of all of this. Here is their contact information.

Finally, please be ready to take further action after Thanksgiving when we know more about exactly what will be unleashed against us.