Buried deep (p 36) in the current .pdf of the La Crosse Park & Rec Activities Bulletin, is this free program on June 18 at the Southside Neighborhood Center:

You can sign up by calling the SSNC, 608 789-8298 between now and June 17 or just show up (though if the minimum enrollment is not met, it may be cancelled.) Learn the facts and the plans so you can be s better climate advocate in the community. 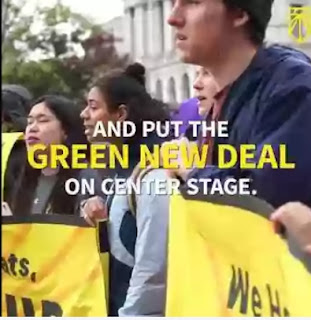 On Wednesday, June 26, there will be a CHANGE THE DEBATE debate watch party from 7:00 to 9:45 p.m. at Hackberry's, 315 Fifth Avenue South. This is a follow up to and continuation of Sunrise Movement's push to make climate crisis THE 2020 presidential debate topic and pass a Green New Deal. More info is at the event site. Flyer coming soon. The event will begin with a Sunrise Movement video and the debate itself begins at 8 p.m. We don't know which candidates will appear on the 26th and which will be on the 27th, but this party is about more than watching the debate. Hope you can make it.
Posted by cathy at Monday, June 10, 2019