Please email CCL if you plan to attend. 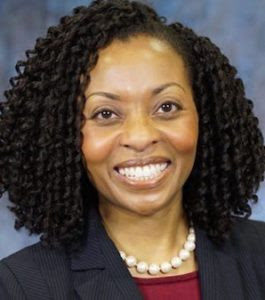 The burning of fossil fuels takes a tremendous toll on public health, not only from the impact of climate change, but also from the pollution that leads to heart and respiratory problems. To learn more about this, we’re joined this month by Dr. Natasha DeJarnett, policy analyst in the American Public Health Association’s Center for Public Health Policy. Her specialty areas within the Policy Center include climate change and environmental exposures.

Dr. DeJarnett received her PhD in Public Health from the University of Louisville in 2013. As a postdoc at the University, she was awarded a fellowship by the National Institute of Environmental Health Sciences to investigate cardiovascular risks of air pollution exposures. In 2015, she received the prestigious Impact Award from the Society of Toxicology’s Cardiovascular Toxicology Specialty Section for her 2014 paper “Acrolein Exposure is Associated with Increased Cardiovascular Disease Risk.”
We look forward to seeing you at the May 18th meeting. Email lacrosseccl@gmail.com with any questions.

=====================    And    ====================
The Sierra Club continues to urge citizens to push local elected officials to commit to 100% renewable and clean energy as soon as possible. Locally, the club has had discussions with city and county leaders but so far talk has not turned to action. However, other mayors continue to sign onto the pledge including recently, the mayor of Madison.

In Wisconsin, the Sierra Club has partnered with Madison's H&H Solar to provide members and non-members with free solar assessments including a homeowner cost/benefit analysis. Those who sign up to install solar will receive a group discount. In addition, RENEW Wisconsin is also helping and encouraging individuals and businesses to go solar and has offered to partner with the local Sierra Club in lobbying local officials to get behind more local renewables.  Meanwhile, opportunities for individuals to flip the power switch continue to expand with the recent introduction into our state of California-based SunRun.

The cost of solar is still dropping and new home batteries are beginning to enter the market. Some homes and businesses are already "cutting the cord" from power companies who continue to demand rate increases and rate payer support for expensive, unsightly, vulnerable long distance high voltage power lines. Net zero/Zero energy homes, continuing energy efficiency (even as Trump plans to ax the Energy Star program), better and innovative solar and battery technology, and the need for individuals to take matters into their own hands may mean that despite a regressive, dirty power administration, clean and renewable will win the day.

Locally, the Town of Holland has installed solar panels on its town hall and offers residents group buy discounts. Fueled by financial projections, improving technology, concern about climate change, and disgust with the grip the fossil fuel industry has on status quo power generation and distribution, many cities are planning not just for 100% renewable, they are working toward 100% renewable off the grid. Developers in Minnesota, communities in New York and around the world are already showing this is feasible. This is the ultimate divestment from the fossil fuel industry.

Electric and hybrid vehicles are becoming more mainstream with efficiencies and ranges increasing. Even if the silly Wisconsin Republicans' plan to charge hybrid drivers an extra fee passes, emissions savings will still make a difference.  Given that vehicle emissions make up about one third of US greenhouse gas emissions, changing personal habits (like driving more efficient vehicles and/or less miles per year, and switching to public transportation) and pushing for more enlightened public policy (like improving and expanding public transportation and bike/ped infrastructure and pushing for policies that reward compact, walkable development), are things people can do on their own.

What are you doing? How can you help others?

Please sign the Sierra Club petition to your mayor and consider joining the Sierra Club or another local organization that is working to move local officials to take the renewable pledge AND next steps.

In the words of Stephanie Mines, Ph.D., a neuroscientist, psychologist and author, who organized a recent conference on Climate Change and Consciousness at Findhorn, a sustainable, intentional community in Scotland,


"This shift in consciousness started on the night of the 8th of November, 2016; the United States election night! It felt like a takeover of my being. It was a thoroughgoing electrical surge pointing me in one direction, like a weather vane strongly turned. I knew I needed to become an indefatigable force for climate change consciousness. I was to educate about climate change, to encourage humanity to uncover its inherent, unquestionable intelligence and resilience, to build sustainable communities that would not only survive but thrive even as climate change accelerated and was denied by its perpetrators. There was nothing of greater importance for me to do. My devotion to individual healing became instantaneously transmuted into an intense focus on collective awakening to this singular necessity: looking climate change in the eye, meeting its challenge joyfully and creatively, and serving as a steward for the planet."