Celebrate the Right to Vote 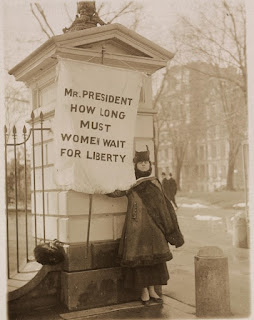 Even as celebrations are planned and happening around the country to commemorate the result of ONE VOTE margin in the Tennessee legislature that provided the last state needed to ratify the 19th amendment giving WHITE women the right to vote, many are not celebrating.

Still, the nearly 100 year battle for women's suffrage provided a model for following struggles including the Civil Rights Movement, the Anti-War movement, and the Environmental Movement. So, maybe we can celebrate an imperfect milestone, appreciate the strong organization that grew from it, and know that inclusion and cooperation is necessary in current and future struggles.

League of Women Voters of the La Crosse Area celebrates the conclusion of its Centennial Year: commemorating 100 years since the US Congress passed the 19th Amendment

At 11:45, August 26, in front of the blue-baby egg sculpture southeast of City Hall La Crosse, Mayor Tim Kabat, along with representatives of La Crosse County Board will present a proclamation recognizing the 100 years since Congress passed the 19th Amendment providing women full suffrage rights. LWV members and the public are invited to attend this short ceremony. Please bring bells, horns or whistles as well as masks.

At noon several area churches, synagogues and mosques will ring their facilities’ bells to commemorate the centennial of both the amendment and the League of Women Voters. This bell ringing reenacts the original celebration of the ratification of the 19th in August, 1920 as reported by the Madison Capital Times.  Local Leagues across the state are planning similar bell ringing on August 26 at noon in their communities.

The League of Women Voters is a non-profit, non-partisan, national organization whose purpose is to promote informed and active participation in government at all levels. Like government, the League functions on several levels—local, state, regional and national.LWVLA is also a part of the state and national Leagues.