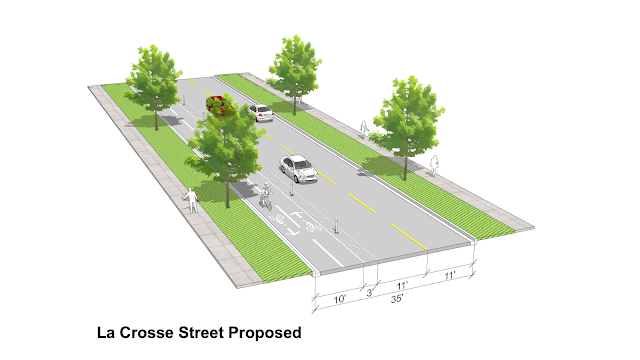 When you get a chance to have input on a public project or visioning, take it. Take advantage of these three opportunities now.

The DOT keeps asking what we want for La Crosse Street and we keep telling them, "NOT what you're proposing!" and they keep moving forward with what THEY want (not the same thing) anyway. So, while they are asking for citizen input, we can't guarantee they will listen to it.

The "reconditioning project" is scheduled for the summer of 2022, but the next, and possibly, final, deadline for the public to review and submit any comments is August 14, 2020.  Submit written comments to Amanda Zacharias, contact person, at Azacharias@benesch.com.

Due to the COVID-19 pandemic, in person public meetings have been suspended, and the DOT has replaced them with this virtual "Public Involvement Meeting." Find the link to attend at https://wisconsindot.gov/Pages/projects/by-region/sw/16-lacrosse/default.aspx

In 2015, the last time the DOT tried to revive the North-South highway nobody in the city wants either, the City hired Toole Design Group to provide an alternate vision of our transportation future. The group spent several days in La Crosse talking to groups, facilitating public input sessions, and making people feel like someone was finally listening. And I'm sure it wasn't cheap.

In their final report, they presented beautiful drawings of what we could have if planners really cared about people-centered, safer, multi-modal, climate conscious systems. Among the promises, a beautiful protected bike lane on Losey (the only straight-through north-south transportation corridor for several blocks, and a route that passes directly to retail and service establishments along that corridor) AND PBLs on South Ave. AND on La Crosse Street, too. (Protect bike lanes, also called cycle tracks, are those that have a physical barrier - planters, poles, blocks, curb, parked cars, etc. between bicyclists and moving traffic. It makes bicyclists feel much safer, widens the age and ability range of people comfortable bicycling, and increases safety and comfort of car drivers. See the National Association of City Transportation Officials (NACTO) Urban Bikeway Design Guide.)

La Crosse Street particularly needs better and safer bike infrastructure because it passes directly near a school, a major park, and the UWL campus. This street, too, is the only straight-shot east-west corridor on the far north of south La Crosse. A protected bike lane on this important corridor would encourage and support more and safer bicycling at a time when the climate crisis demands we get out of our single-occupant, greenhouse-gas-emitting cars.

How disappointing, then, to see that the city spent all that money, and the community, time and effort, on nothing. The reconstruction of Losey resulted in ZERO bike infrastructure. ZERO. Not even the inadequate, unsafe painted lanes some still believe in. And the DOT's plans for La Crosse Street are no better. Not only is there not improved safety for bicyclists,  the plan calls for the street to be widened to provide a WIDE turn lane which will require the removal of dozens of trees. (Why do we need to be an extra wide lane that will remain empty most of the time?) They are planning exactly the opposite of what we want and need. When people warn about rule by robots, I think we just need to look at the DOT to see what that's like - outdated, inaccurate metrics fed into the system at one end and blindly pooped out at the other regardless of changing transportation modes and needs.

Please check out the plans, then email the DOT representative and tell them that.

The City of La Crosse and Downtown Mainstreet are asking the public for ideas for the ‘Imagine 2040 La Crosse Downtown Plan’. Stop by the outdoor Design Studios on Wednesday or Thursday to participate in person. The main studio is set up at the Main Street Plaza in the Heron walkway. Or visit the one at the Grounded Patio Cafe or the Downtown Mainstreet office. To take the ONLINE SURVEY, click here

Another transportation survey - this time WisDOT is planning the transportation system of the future and they are looking for public input (though, again, may not pay any attention to it). #Connect2050 is the long-range, statewide plan for the next 30 years. Fill out the survey at http://connect2050survey.com
Posted by cathy at Thursday, August 13, 2020