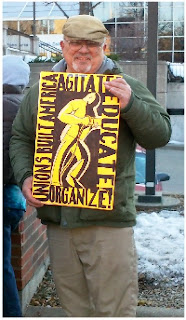 The epic battle, not just for important union and worker rights, but really for our progressive Wisconsin, continues. If you can get to Madison to join the tens of thousands of fellow citizens, go. Buses are available on some days (check AFT-Wisconsin for details). Or check with local unions or Democratic party offices to see about car-pooling.

If you can't make it to Madison, here are some other random suggestions:

1. Find out about local actions and get involved.

2. Email each and every one of the 14 Democratic State senators to THANK THEM for standing the line.

3. If you are on Facebook, join Recall Scott Walker (not just a FB group), I Support the WI 14, and Boycott Scott Walker Contributors at least.

4. Keep up with what's happening through FB, Twitter or Mother Jones blog updates or The Uptake.

5. Watch Assembly Floor Session Part 4 and pass it on. Guy suggests purchasing it and distributing it to churches, schools, civic organizations, etc.

6. Read about your new masters (if Republicans win this one).

7. Email Scott Walker to challenge this blatant lie: "Saturday morning, Cullen Werwie, a spokesman for Gov. Scott Walker, said the Governor's office is receiving about 1,000 e-mails an hour, all supporting the budget bill and the elimination of collective bargaining."

8. Look ahead. No matter what, many very important issues will be decided by the Wisconsin Supreme Court. Currently, the court has a 4-3 conservative majority, including two justices who have very questionable ethics pasts. The April election will pit appointed incumbent, conservative David Prosser against progressive-friendly JoAnne Kloppenburg. We must flip this court! Please do all you can to support, work for, contribute to and ELECT JOANNE KLOPPENBURG to the Wisconsin Supreme Court.

9. Educate yourself! and then talk to and challenge any neighbor, friend, co-worker, acquaintance, asshole n grocery store line or whoever expresses support for the bill. They are obviously completely clueless.

Some points to consider:

* This bill is part of a strategic reactionary anti-government national movement. It was not written with the people, families, businesses or economies of Wisconsin in mind. It is part of a national plan to bring Republican "you're on your own" living to Wisconsin and the nation. It was concocted at the November 2010 Republic Governors' Association meeting in San Diego with right wing groups, lobbyists and big business.

* There is no historic budget crisis looming. In fact, Wisconsin would have posted a surplus for the year had Walker not passed tax breaks and shelters for cronies and donors in January.

* This bill would give unprecedented power to the governor over state health programs including BadgerCare, SeniorCare and Medicaid.

* This bill would be devastating for women's health and reproductive rights.

* This is a battle for ALL workers. Listen to Noam Chomsky's take. Listen to economist David Cay Johnston on the Dylan Ratigan show.