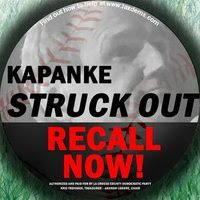 Dan Kapanke will be at the Vernon County Courthouse at 400 Court House Sq. in Viroqua at 8:00 a.m. on Monday - if you're able to make it, please attend and let him know what you think about the Walker bill (and remember, it's not JUST about collective bargaining! There's plenty in that bill that will harm our communities!)

This does not in any way lessen our resolve to remove him from office! As I've said many times, just because one does not throw more gasoline on a house fire, does not mean he deserves to continue serving. He had the chance when the Walker budget repair bill was first introduced to say, "This bill will harm my district. I cannot support it. I must work against it." Instead, he did nothing to stop it and in fact has parroted Republican talking points in support of it even after they were no longer valid.

He had his chance to show that he was truly representing the people of the 32nd district and he failed. It's time for him to go. Period.

And remember, this is just the bill for last year's budget. What about the new budget bill? That's even worse! And what about redistricting? Will we have to fight tooth and nail about those, too?

If you want info about signing or circulating the petition, please email CouleeProgressive.
Posted by Cathy Van Maren at Saturday, March 05, 2011