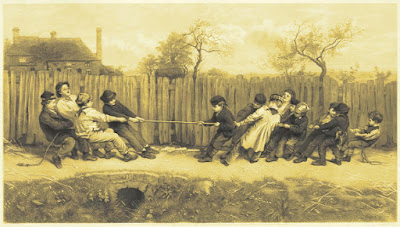 If you are not a member of the Democratic Party or don't want to be, then just skip this one. But if you normally work for, contribute to, and vote for Dem candidates, consider joining the party so you will have more chance to influence the direction of the party - policies, priorities, goals, and candidates - going forward.

You can join at the meeting. Complete this form and bring it with your dues. The next meeting is Monday, February 20 at 7 p.m. in the lower level of the Ho-Chunk Three Rivers House, 8th and Main. Read more here.

The speaker will be Terry Hicks, member of the Western Wisconsin AFL-CIO Council, editor of the La Crosse Union Herald and former La Crosse Democratic Party chair. Unions are facing threats from every corner. Just this month, the Wisconsin Senate passed a bill prohibiting state and local governments from requiring contractors bidding on projects to enter into collective bargaining agreements. Nationally, Republicans are seeking to replicate Wisconsin's ACT 10. Why did Donald Trump hold a rally at South Carolina's Boeing plant? Might it be the resounding defeat Boeing workers handed union organizers last week?

There will also be a vote on whether or not the La Crosse County Democratic party will urge state  party officials to vote for Keith Ellison as DNC chair. Ellison, who was a strong Bernie supporter during the primary campaign, has pledged an active-in-every-county-of-every-state system of support, candidate growth, outreach, and rejuvenation. He's been endorsed by Senators Elizabeth Warren, Bernie Sanders, Chuck Schumer, and Tammy Duckworth plus many other elected officials and organizations.

The party continues to seek new members, perspectives, ideas, and energy, from committee work to volunteer drivers for free rides to the polls on Tuesday, Febtuary 21. More information will also be provided about the party's Third Congressional District Convention in March.


Robert Reich, in his January article, 7 hard truths the Democrats must acknowledge if they want a better future, writes,


"The moneyed interests in the party allowed the deregulation of Wall Street and then encouraged the bailout of the Street. They’re barely concerned about the growth of tax havens, inside trading, increasing market power in major industries (pharmaceuticals, telecom, airlines, private health insurers, food processors, finance, even high tech) and widening inequality.

"Meanwhile, they’ve allowed labor unions to shrink to near irrelevance. Unionized workers used to be the ground troops of the Democratic Party. In the 1950s, more than a third of all private-sector workers were unionized; today, fewer than 7 percent are.

"It’s not enough for Democrats to be “against Trump” and defend the status quo. Democrats have to fight like hell against regressive policies Trump wants to put in place, but Democrats also need to fight for a bold vision of what the nation must achieve — like expanding Social Security, and financing the expansion by raising the cap on income subject to Social Security taxes; Medicare for all; and world-class free public education for all.

"The party must change from being a giant fundraising machine to a movement. It needs to unite the poor, working class and middle class, black and white — who haven’t had a raise in 30 years, and who feel angry, powerless and disenfranchised."

If you agree with Reich, this is your chance to make a difference.