Pushing back one action at a time

Several people have mentioned stuff coming up that's easy to do and important to keep an eye on! 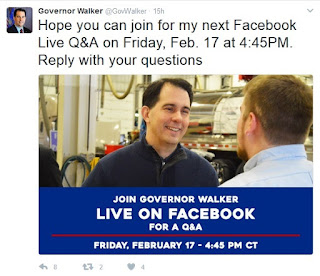 Thanks, Kathy! Submit questions there: https://www.facebook.com/governorscottwalker/

Ron Johnson is having a telephone town hall tomorrow Thursday,  2/16 at 3 p.m. His in person town halls are few and far between and usually set up in small villages during the day so not many people can attend. Sign up NOW to receive an invitation to it at 3pm at https://www.ronjohnson.senate.gov/public/index.cfm/telephone-town-hall-signup (Thanks, Beth!)

A General permit for dredging in all Wisconsin lakes has been applied for and two hearings will be held on February 14 and 16.  Also, public comments will be accepted via email until March 3, 2017.  The email can be sent to dnrwywrzguidance@wisconsin.gov

The permit will allow the following:
Because this is a permit and not legislation the only way to stop is to flood the DNR with comments opposing this permit.  Contacting our legislators won’t work.  These groups are trying to exploit a loop hole in the law that is designed to help projects like the Tree Drops on Lake Menomin to create a state wide environmental disaster.

This permit is being promoted by a company that dredges lakes, the builder’s association and the realtors. If you would like more information, call Wisconsin Wildlife Federation District 3 Rep Jim Swanson at 715-232-8266.

CONSERVATION LOBBY DAY - MARCH 29! VERY IMPORTANT
A recent study showed 18 percent of all wells in the state are contaminated with bacteria that indicate the presence of disease-causing organisms. Learn more.


When a group representing some of the state's biggest polluters directly interferes with policies that determine the quality of our drinking water, it's time to fight back!
The Dairy Business Association (DBA) has had its say with Gov. Walker, now we need to make sure our voices – and the voices of families who can't drink their water – are heard. That's why we need you to join us at Conservation Lobby Day on March 29th.
Register here to make your voice heard on March 29th!
Dozens of wealthy, powerful special interests run the DBA – and its priority is to ensure factory farms continue to operate with as little oversight as possible.
Join us for a day filled with valuable information, meetings with lawmakers, and fellowship with the conservation community. For more information, visit our website.