Indivisible: Save the Court 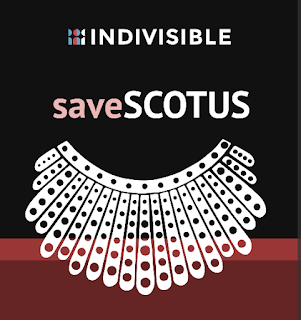 Supreme Court Justice Ruth Bader Ginsburg, a champion for civil rights and gender equality, passed away on September 18. We cannot let Donald Trump destroy her legacy by replacing her with a justice from his shortlist of conservative extremists. Anyone Trump picks to replace RBG would no doubt undo all of the progressive change she fought for her whole life.

Majority Leader Mitch McConnell, who held open a Supreme Court seat for over a year in 2016 to prevent Barack Obama from filling it,  has already declared he will bring Trump’s nomination to the floor for the vote. We cannot let this happen. We have to block everything Republicans try to do to get this nomination confirmed and we have to fight like hell to take back the Senate and the White House in November.

Call, tweet, and email your senators – and then start phonebanking, writing letters, or plan a local event to take the Senate this November. We owe Justice Ginsburg nothing less.

Indivisible is calling for Senate District Office visits this Friday, September 25 to demand that our senators not vote to confirm a new justice until after Inauguration Day. Find more than 600 phonebanking, textbanking, and letter writing events to take back the Senate on Indivisible's map