The latest on electric vehicles - September 29 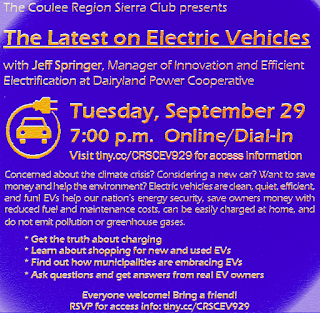 Did you know that electric vehicle (EV) owners save about 50% on maintenance and repairs over the life of their vehicles compared to similar costs paid by owners of internal combustion engine (ICE) vehicles? That's the conclusion of a new report issued by Consumer Reports, a scientific, non-partisan consumer interest resarch group. "Consumer Reports analyzed its 2019 and 2020 reliability survey data for thousands of electric and gas-powered vehicles, and found that drivers of electric vehicles are saving an average of 50% on maintenance and repair over the life of a vehicle compared to owners of gas-powered vehicles."
The organization has also found that, "Nationwide EVs are over 60% cleaner than the average gasoline powered vehicle."
An August study from Northwestern University concluded that, "... if EVs replaced 25% of combustion-engine cars currently on the road, the United States would save approximately $17 billion annually by avoiding damages from climate change and air pollution. In more aggressive scenarios — replacing 75% of cars with EVs and increasing renewable energy generation — savings could reach as much as $70 billion annually."

On Tuesday, September 29 at 7 p.m., the Coulee Region Sierra Club will host an online program on The Latest on Electric Vehicles with guest Jeffrey Springer, Manager of Innovation and Efficient Electrification at Dairyland Power Cooperative. RSVP for access information at tiny.cc/CRSCEV929

Discussion will include information about current and coming EVs, the truth about charging, how we can encourage EV adoption in our communities and more. EV owners will join Mr. Springer, an EV owner, to answer your questions.

In 2019, the Sierra Club released a report of its nationwide study on the EV buying experience. The report found that many dealerships are not selling EVs, many sales staff are inadequately trained and educated about EVs, and some consumers found sales personnel to be antagonistic toward EVs.

"Shockingly, we found that 74% of auto dealerships nationwide do not have a single EV on their lot for sale and that consumers were still not being given important information about charging, battery range, and financial incentives.In some instances, volunteers indicated that they could not go for a test drive because the vehicle was insufficiently charged or that they were encouraged to purchase a non-electric vehicle instead."

Many buyers think the EVs are too expensive, but the cost of used EVs in many cases is
similar to the cost of equivalent used ICE vehicles. It is very possible to purchase a used EV or a plug-in hybrid EV for under $10,000. Factoring in the total cost of buying and owning a car, EVs are already cheaper than fossil-fueled vehicles. Many EV experts expect purchase prices of EVs to cost less than ICE vehicles within the coming decade.

To be sure, there are issues with current EVs including lithium required in batteries, pollution caused by tire wear, and congestions issues not addressed by switching an ICE vehicle with an EV. But, if we are going to travel, finding the cleanest, least carbon-emitting way should be a top priority. Battery research is continuing and efficiencies improving.

Join the conversation! Everyone is welcome.