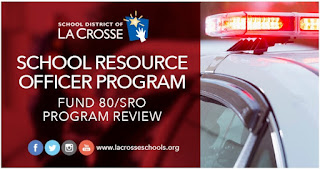 We need EVERYONE to get in on this next public hearing the La Crosse School Board is hosting about the "School Resource Officers" (aka police in schools) program on MONDAY, OCTOBER 12 AT 6 P.M. (online).

I lurked on the September public hearing and to me, it was, in many ways, like deja vu all over again. Anyone who lived through the school mascot debates or the "Big Indian" discussions has heard this before.

People say, "This public action paid for with public money is hurting me, my children, and my community. We have proof in the form of personal testimony and academic research. We want to change things because this use of our shared public resources is causing harm to many people. It is biased, unfair, and unjust."

And other people, often those who have had control of decisions for a long time, say, "This is how it's always been. We like it. It doesn't harm us. We don't want anything to change."

The students who spoke in September were brave and bold. They told their own stories and it probably wasn't easy. I don't know if they felt heard. Those who want to keep the police made things sound like our schools are so violent and out of control that they're one step below Attica. In my, albeit limited, visits to local high schools in the past few years, I've found things to be pretty much like, well, high school (except for the "you are now entering prison" experience visitors have when they arrive).

More people need to attend the public hearings and SPEAK UP. People who aren't students or teachers but who are members of the society that students and teachers and school policies shape need to SPEAK UP. We all need to be included in this discussion. Sign up and tell your story even if you are not a student, current parent, or teacher. We all are affected by the norms that are established by policies and expectations in our schools, the societies-in-training that adults set up to transition students from childhood to adulthood, from adult guidance to autonomy.

Why I oppose police in schools:

* They intimidate people and create a hostile learning environment for many students (and I imagine being a staff member in a constantly-policed space can be pretty stressful, too).

* Their presence doesn't seem to be fulfilling its promise.

* They are not needed as a full-time presence. If there's a problem requiring police, they can be called.

* They are not trained for the environment. If police want to be in schools, let them become licensed teachers or psychologists or counselors. High school students are going through a "pushing the envelope" stage of development with brains that are not fully connected. Understanding human development and how to guide students into adulthood is very important.

* They are expensive. We could hire more counselors and mediators, offer more personal mentoring, have smaller classes, and/or provide more learning opportunities with money saved.

* They are biased. We are all biased. Studies show that a community's bias affects how its police act. When rules are not equally enforced every time of every one, it makes the bias of the community and its enforcers the deciding factor in who is policed and who is not policed.

* They are the hammer that only sees nails. Several at the September hearing noted the "school to prison pipeline" which exists because minor infractions and normal teenage behavior suddenly become ticketable offenses requiring a court hearing and possible legal consequences. When my brother tried out his new wrist-rocket by seeing how far he could shoot a rock from our backyard and when that rock broke the window of our neighbor two houses away, my parents made my brother apologize and clean up the mess and pay for the broken window. He wasn't arrested and taken into custody and jailed and fined. We need to demonstrate how we solve disputes and problems without making our adversaries into criminals at every turn.

* Making students and school staff operate in a constantly-policed environment normalizes constant policing which should not be the norm. If we live in a free society, we should be laying the groundwork for young citizens to be free and autonomous, not subject to immediate enforcement (and unequal) enforcement of rules.

This is something that hasn't really been discussed in the forums I've heard. The adverse affects of over-policing in communities of color are well-documented.  Laws and rules are not equally enforced. People in the unpoliced group may assume those who are over-policed must be making "bad choices" rather than realizing their privilege. How many in our community go faster than the speed limit on Losey Boulevard? How many are stopped and ticketed for it? It's easy for people who are never stopped and never expect to be stopped to assume those who are stopped must have done something really wrong. But we've all heard (or experienced) the stories of driving while black, walking while black, eating out while black, shopping while black, studying while black, etc. We need to remove over-policing from all our communities, not train students to accept it.

If we normalize unequal and biased enforcement of, often, arbitrary rules, we will be going in just the opposite direction in the effort to create a just society. If we normalize constant oversight of our every waking moment we will be heading into a nightmare.

We need MORE voices talking about why police in public schools is a very bad idea. We need more unpoliced people who understand what's going on to explain this to those who want over-policing. And we need to be there to create a more welcoming and supportive environment for those who dare to tell their own truths and hope to be heard.

"Community members interested in speaking at the forum should register by calling the superintendent’s office at 608.789.7659, or via email at lsteiger@lacrossesd.org. Prospective speakers should register by 4:30 p.m. on October 12. Registered speakers will be given five minutes to speak during the forum.
--
"After the second public forum, the next steps in the SRO program review will include an analysis of local, state, and national data, a continued review of published literature on SRO programs, and gathering of local data through surveys and interviews."