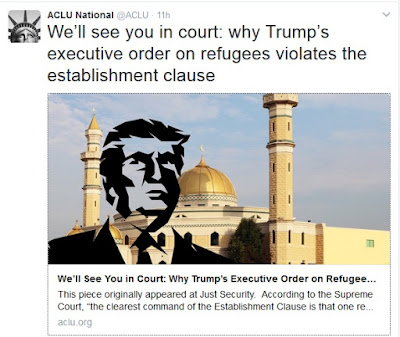 Around the country people are saying NO to the Trump immigration ban. Apparently, the executive order was never shown to the Defense Department, State Department, Justice Department and other offices and offices that should have been consulted.

There have been many outrages including

The positives:
We hear a rally is being planned for some time this week to show solidarity with target communities and reject the unconstitutional ban on travel Trump's executive order mandates. Details as soon as they are available.Start making your signs NOW! so you'll be ready to go when the plans are finalized.

In the mean time, please spend part of your day Monday calling the following officials (calls have much more impact than emails).

Actually, 5 Calls is the easiest way to make those calls every day. Click "Change Location" and enter your zip. A list of topics (including this one) will come up with the ability to make calls right away and sample talking points.


ps After calling about this illegal action, call Johnson again and Senator Baldwin ((608) 796-0045) and tell them Senator Sessions is unfit to serve as our Attorney General. UPDATE: AND BETSY DE VOS (Edecation) AND REX TILLERSON (State) should also be rejected. All are unqualified and have extreme conflicts of interest.
Posted by cathy at Sunday, January 29, 2017