This is important, people! It's coming and we need to get organized and get active. 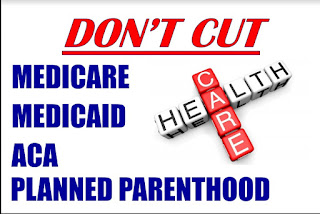 Tomorrow's SAVE OUR HEALTHCARE rally is one of hundreds happening around the country.It starts at 1:30 p.m. at Cameron Park (5th & King) in downtown La Crosse. Ken Tschumper and others have really gone all out in a very short time to get speakers, musicians, publicity, and more to make this something our elected officials can't ignore. Please attend. Please bring others. This is just the first step, but it's important that we all get together going forward.

How bad can it be? Our Wisconsin mini-Trump and his rascals have put forward plans to rip apart our near-death Department of Natural Resources, allow CAFOs to (not) police their own water pollution, and even roll back protections for child laborers. And the new Trump administration, true to its zombie apocalypse core, is talking about opening up national parks for fossil fuel production, building more nukes, restarting not just DAPL but also KXL pipelines, ending legal protections for GLBTQ citizens, forcing women back into the Ceaucescu era, tearing up Social Security, Medicare, and Medicaid protections, and much much more. 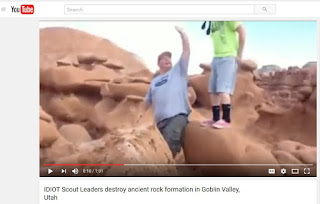 Many people have come up with lists of how we can resist the Trump agenda even as they prime the charges to totally wipe out the benefits gained not just from the Great Society and New Deal programs, but going all the way back to the turn of the 20th century (Ladies, hold onto your VOTES please! That right is not yet 100 years old, remember?) Wait, haven't we seen this before? Idiot Boy Scout leaders? Islamic State? (As the BBC asks, "Why does Islamic State destroy ancient history?")

The problem is that the new leaders are not interested in the old system. Mandate? They don't need no stinkin' mandate! While you are thinking that surely there's a law about that, they are repealing that law and replacing it with one that does just the opposite or just ignoring it altogether. All your base are belong to us. Please read and absorb this quote from the great Ron Suskind article about the Bush administration, 2004's Faith, Certainty, and the Presidency of George W. Bush. Trump is going to be that on steroids and with a crazy, yessir Congress. And probably the Supreme Court, too. And let's not forget - the Congress is still infested with corporate Dems who just can't bring themselves to buck their masters and so willingly and reliably sell out their constituents for a campaign contribution.

The aide said that guys like me were "in what we call the reality-based community," which he defined as people who "believe that solutions emerge from your judicious study of discernible reality." I nodded and murmured something about enlightenment principles and empiricism. He cut me off. "That's not the way the world really works anymore," he continued. "We're an empire now, and when we act, we create our own reality. And while you're studying that reality -- judiciously, as you will -- we'll act again, creating other new realities, which you can study too, and that's how things will sort out. We're history's actors . . . and you, all of you, will be left to just study what we do."

Some of the best Rise-and-Resist suggestions include Robert Reich's 12 (or 14) Ways to Resist (and/or Disrupt).


Get your senators and representatives to pledge to oppose Trump’s agenda. Reject his nominees, prolong the process of approving them, draw out hearings on legislation. Call your senator and your representative and don’t stop calling.


Yale professor, Timothy Snyder, has written a great post for Yes! magazine - Post-Fascist Europe Tells Us Exactly How to Defend out Democracy (20 Lessons from the 20th Century)  If you have ever been railroaded by a person or system who you thought you could trust, you will get this. His number one suggestion:


DON'T OBEY IN ADVANCE. Much of the power of authoritarianism is freely given. In times like these, individuals think ahead about what a more repressive government will want, and then start to do it without being asked. You’ve already done this, haven’t you? Stop. Anticipatory obedience teaches authorities what is possible and accelerates unfreedom.

There are many others out there, but the third (thanks, George) is written by former Congressional staffers and is actually a handbook of real things real people can do based upon their knowledge of how congress and elected officials operate. It's The Indivisible Guide. Please download, read, and share.

Donald Trump is the biggest popular vote loser in history to ever call himself President- Elect. In spite of the fact that he has no mandate, he will attempt to use his congressional majority to reshape America in his own racist, authoritarian, and corrupt image. If progressives are going to stop this, we must stand indivisibly opposed to Trump and the members of Congress (MoCs) who would do his bidding. Together, we have the power to resist — and we have the power to win.

We know this because we’ve seen it before. The authors of this guide are former congressional staffers who witnessed the rise of the Tea Party. We saw these activists take on a popular president with a mandate for change and a supermajority in Congress. We saw them organize locally and convince their own MoCs to reject President Obama’s agenda. Their ideas were wrong, cruel, and tinged with racism— and they won.

We believe that protecting our values, our neighbors, and ourselves will require mounting a similar resistance to the Trump agenda — but a resistance built on the values of inclusion, tolerance,
and fairness. Trump is not popular. He does not have a mandate. He does not have large congressional majorities. If a small minority in the Tea Party can stop President Obama, then we the majority can stop a petty tyrant named Trump.

To this end, the following chapters offer a step-by-step guide for individuals, groups, and organizations looking to replicate the Tea Party’s success in getting Congress to listen to a small, vocal, dedicated group of constituents. The guide is intended to be equally useful for stiffening Democratic spines and weakening pro-Trump Republican resolve.

We believe that the next four years depend on Americans across the country standing indivisible against the Trump agenda. We believe that buying into false promises or accepting partial concessions will only further empower Trump to victimize us and our neighbors. We hope that this guide will provide those who share that belief useful tools to make Congress listen.